The term "greenfield software project" refers to the development of a system for a new product that requires development from scratch with no legacy code.

This is a method you use when you are beginning from scratch and have no constraints or dependencies. You have a fantastic opportunity to build a solution from the ground up. The project is open to new tools and architectures.

I've been looking around the internet for ideas on how to put up a CI/CD pipeline for terraforming deployment. But I couldn't find a comprehensive end-to-end terraform deployment instruction.

The majority of the guides and blog posts I discovered discuss the deployment pipeline for single (Prod) environments. So I've chosen to build my personal lab project and turn it into a blog post.

In this article, I will discuss the entire Terraform deployment workflow from Development to Production environments. I will also present topics and techniques that I will be using in my lab assignment.

There are two reasons why I choose Terraform as my infrastructure as code tool. The first is that I've been using cloud formation for a long time and have a lot of experience with it, so I wanted to get some experience with Terraform.

The second reason I chose Terraform is that this is a greenfield DevOps project, so I can pick a modern technology and play with it.

I will go over some of the features of Terraform in this article. Let's get started.

Before we get into deployment patterns, I'd like to go over the tools I'll be using.

Terraform is an open-source provisioning framework. It's a cross-platform application that can operate on Windows, Linux, and macOS.

You can use Terraform in three ways. 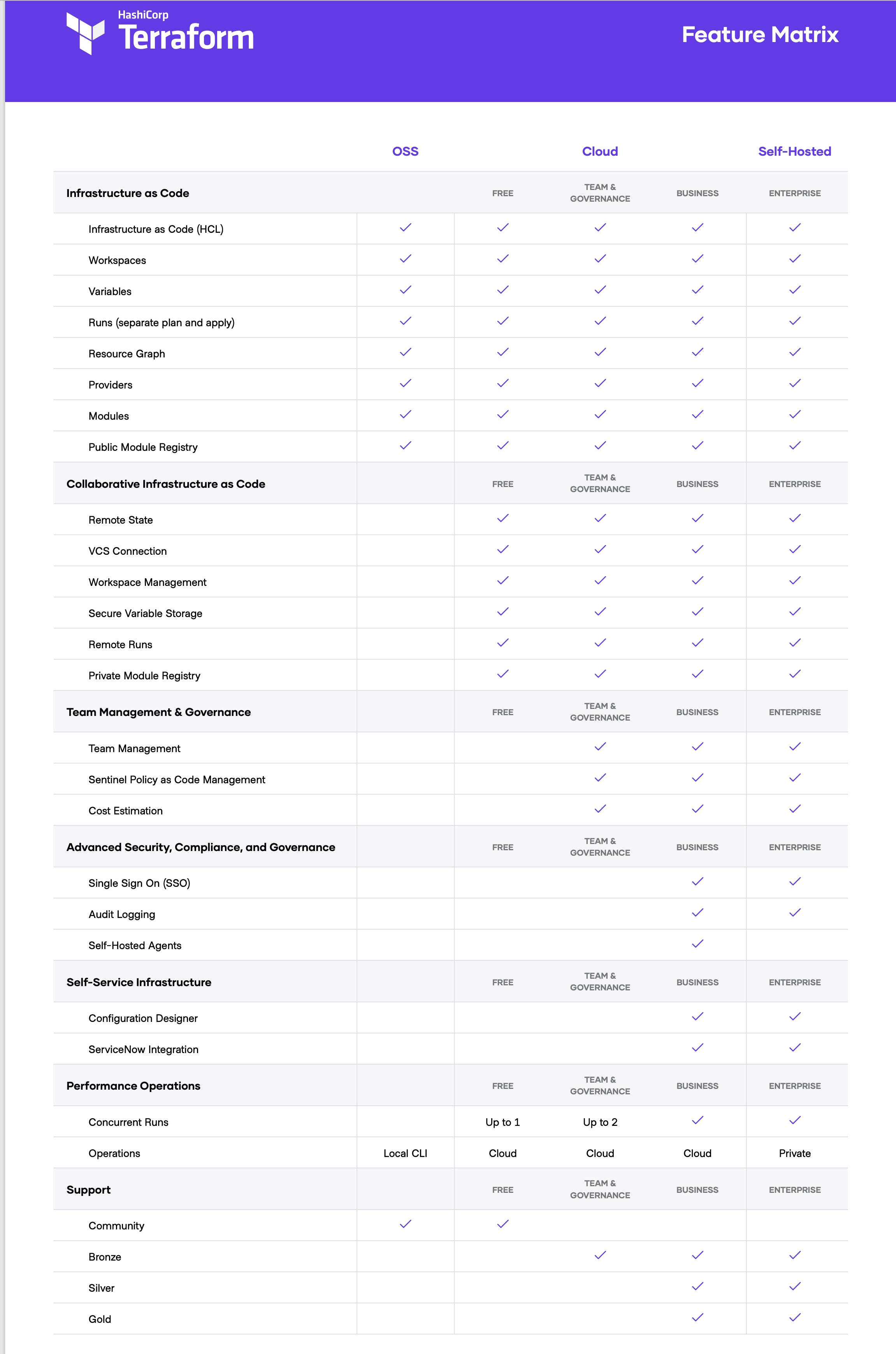 What is Terraform Cloud?

You can use Terraform CLI or Terraform console to deploy infrastructure from your laptop.

If you are a single team member, this may work for a while. But this strategy will not be scalable as your team grows in size. You must deploy from a centralized location where everyone has visibility, control, and rollback capabilities.

There are numerous technologies available for deployment from a centralized location (CI/CD). I intended to try Terraform pipeline deployment using the "GitOps" technique.

A Git repository serves as the single source of truth for infrastructure definitions in GitOps. For all infrastructure modifications, GitOps use merge requests as the change method. When new code is integrated, the CI/CD pipeline updates the environment. GitOps automatically overwrites any configuration drift, such as manual modifications or errors.

For my deployment, I'll be using GitHub Actions.

GitHub Actions lets you automate tasks throughout the software development lifecycle. GitHub Actions are event-driven, which means you can run a series of commands in response to a specific event.

For example, you can run a command that executes a testing script, plan script, and apply script every time someone writes a pull request for a repository. This allows you to incorporate continued integration (CI) and continuous deployment (CD) capabilities, as well as a variety of other features, directly in your repository. 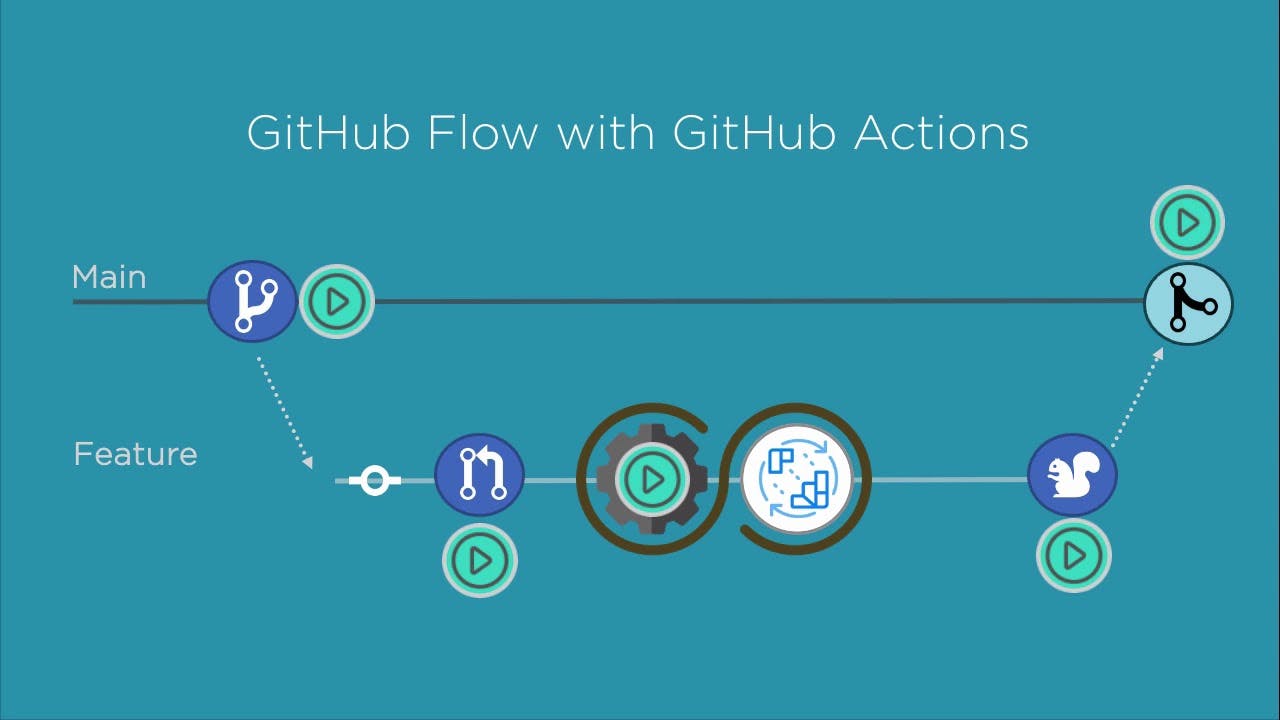 Check out this link to get more information about the actions available on GitHub.

So far, I've introduced the tools and services that I'll use in my deployment pipeline. Now I'll look into the Terraform directory structure.

To summarize, I will be using Terraform Cloud and GitHub Actions. Another thing to note is that I will not go into great length about writing Terraform code in this article. I'll be using code from the Terraform Registry. Thank you very much, Anton Babenko.

Setting Up the Project

Assume you've just started a new job and your first assignment is to create VPCs. They want you to set up three VPCs for them (Dev—>Stage—>Prod VPC). You've decided to use Terraform to deploy VPCs.

First, I'll provide several samples of commonly used directory structures, followed by information about the directory I'll be using in my project.

In this arrangement, you will have three files. Your major file is main.tf. This is the file in which all of the resources are defined.

variables.tf is where you define your input variables:

outputs.tf output values are defined in this file:

You will not be able to scale your project or team with the basic directory structure.

Multiple habitats and areas will be required for the broader project. You'll need a decent directory structure to transfer infrastructure from development to production environments using a CI/CD solution. You can use Terraform Modules in this structure.

I've noticed a lot of projects use this structure. In this case, the contents of each environment will be nearly identical.

Having a separate folder and separate configuration file, as I described in the prior section, makes little sense. You can get in touch if you believe there is an advantage to having a different folder for each setting.

As a result, below is my proposed directory layout for VPC deployment.

You may be wondering how you will reference resources from multiple repositories. This is where Terraform cloud workspace will come in handy. I'll go through this in more detail later in the article.

If you look at the above directory, you might assume it looks like a "Basic Directory Structure." You may also be asking where module directories are. Yes, directories seem the same, but the magic happens within the configuration files.

I maintained modules separate from setups. My modules are all placed in a separate repository. I'll refer to that module by its Git repo URL.

The source argument in a module block tells Terraform where to find the source code for the desired child module.

We can use the Terraform registry as a module source because we are using Terraform Cloud. However, each module needs its own git repository. If you're publishing vpc modules (terraform-aws-vpc), for example, you can only provide code for those vpc resources that are relevant to the module. Another repo is needed for the security group module (terraform-aws-sg).

One module per repository. The registry cannot use combined repositories with multiple modules.

However, it is worth considering this structure if your organization has a separate network, security, and compute team. Each team can handle their modules independently.

Organizations are a shared place in Terraform Cloud for teams to collaborate on workspaces. Remote state setups can be shared between organizations.

You can, for example, build companies based on a project or a product. Like if you are attempting to create an Apple product, you can name it "apple." "nitheeshp" is the name I gave to my project.

Instead of directories, Terraform Cloud maintains infrastructure collections using workspaces. A workspace is related to contexts such as dev, staging, and prod.

Terraform configurations, variable values, and state files connected with an environment are all stored in the workspace. Each workspace keeps backups of earlier state files.

In my project, I set up a workspace for each Amazon Web Services service. Each workspace can be linked to a Git branch or Git repo. 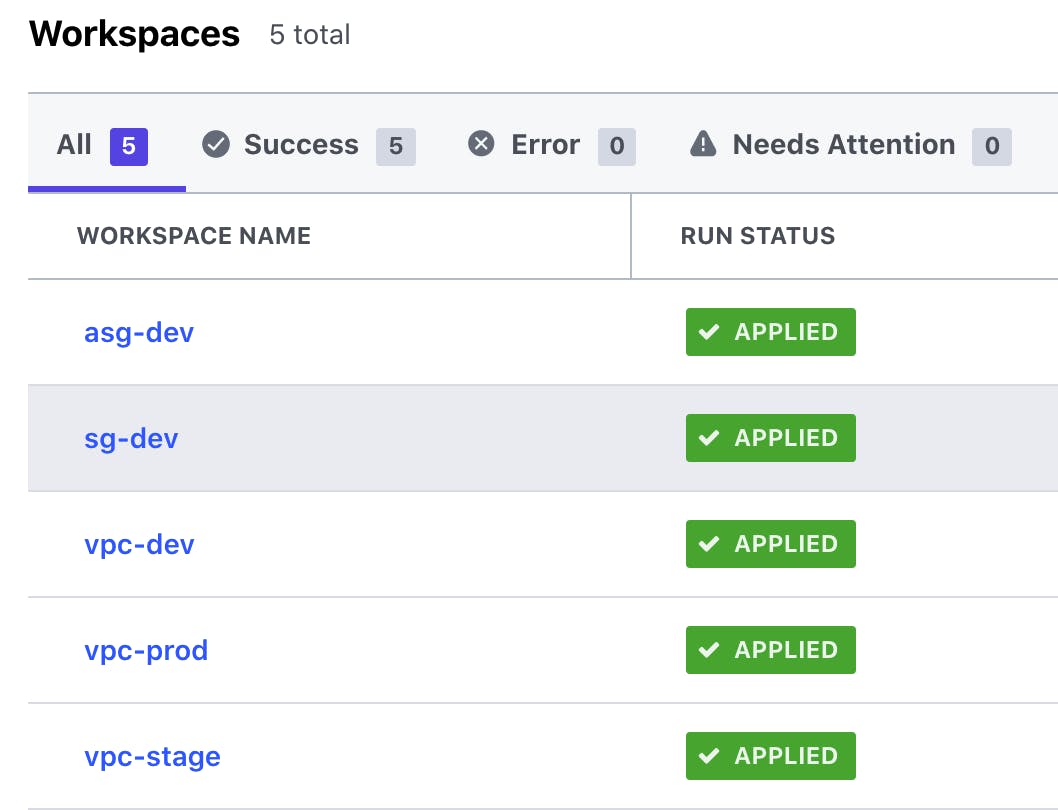 When you create a workspace, you have three options for designing your Terraform workflow: 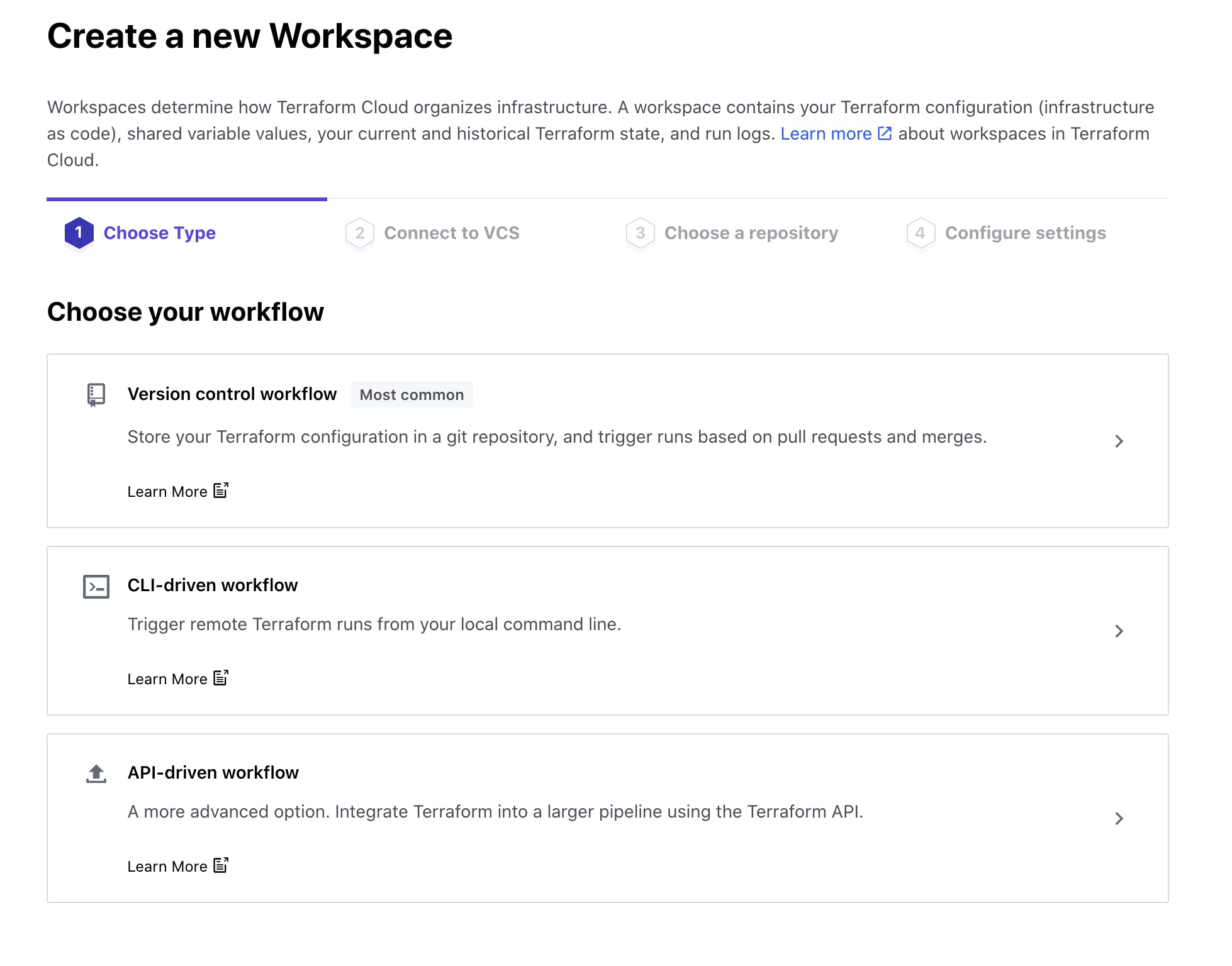 If you look at my Terraform directory structure below, you'll notice that I haven't set any default values for my variables. Variables have been related in Terraform workspace settings.

If you look at main.tf, you'll notice that all environments use the same Terraform cloud-config. You may be curious as to how I go about making modifications to a certain workspace. The workspace prefix is what I'm using.

When you add a workspace to your configuration, it will prompt you to choose a workspace. As an example:

Set the TF WORKSPACE environment variable to the workspace name you want to be selected when using Terraform in CI/CD.

How to Deploy Security Groups

As previously stated, I deploy security groups using a separate repo and workspace. A VPC id is required for the deployment of security groups. This is where Terraform data sources come in.

As you can see, I'm getting the VPC id from the vpc-dev workspace.

As we discussed above, we'll also use GitHub Actions in our deployment pipeline.

GitHub Actions makes it simple to automate all of your CI/CD workflows. You can build, test, and deploy code directly from your GitHub repository. You can also make code reviews, branch management, and issue triaging the way you want them to function. Github Actions offers free plans.

Workflows consist of one or more jobs that can be scheduled or triggered by an event. You can use the workflow to create, test, package, release, or deploy a GitHub project.

Here are the GitHub repos for this project if you want to take a look:

I would love to learn more about your Terraform deployment methods. Please get in touch with me if you'd like to share them and discuss further.