This article is a summary of what I'm writing about in my newest project, solidbook.io - The Handbook to Software Design and Architecture with TypeScript. Check it out it you like this post.

It's crazy to me to consider the fact that Facebook was once an empty text file on someone's computer.

This past year, I've been going hard in software design and architecture, Domain-Driven Design, and writing a book on it, and I wanted to take a moment to try to piece it together into something useful I could share with the community.

Here's my roadmap for how to learn software design and architecture.

I've broken it down into two artifacts: the stack and the map.

Similar to the OSI Model in networking, each layer builds on top of the foundation of the previous one. 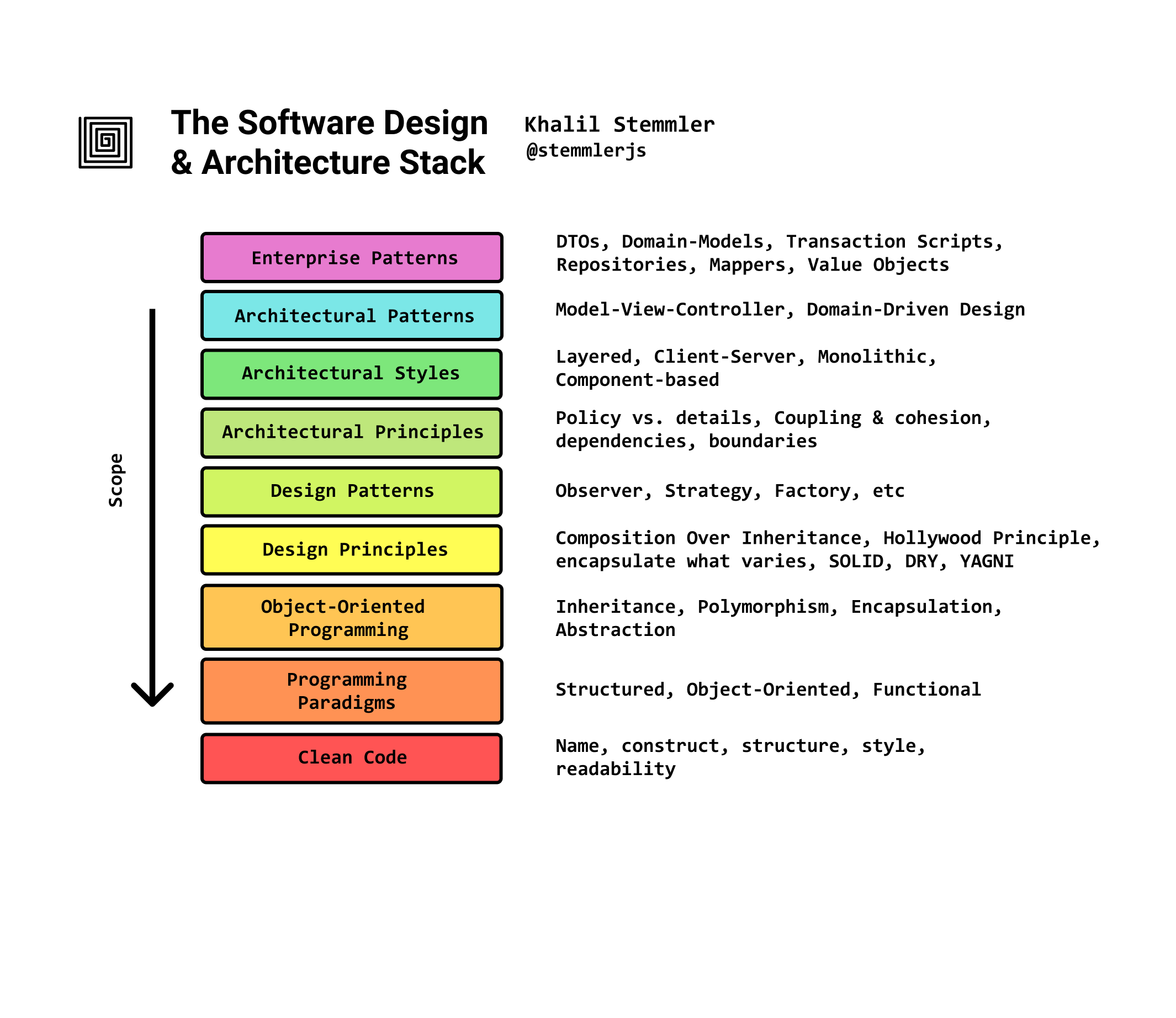 While I think the stack is good to see the bigger picture of how everything works together, the map is a little bit more detailed (and inspired by the web developer roadmap) and as a result, I think it's more useful.

Here it is below! To fork the repo, read my detailed write-up and download it in high-res, click here.

The very first step towards creating long-lasting software is figuring out how to write clean code.

Clean code is code that is easy to understand and change. At the low-level, this manifests in a few design choices like:

In order to keep the structure of our project stable over time, things like indentation, small classes and methods, and meaningful names, pay off a lot in the long run.

The best resource to learn how to write clean code is Uncle Bob's book, "Clean Code".

Now that we're writing readable code that's easy to maintain, it would be a good idea to really understand the 3 major programming paradigms and the way they influence how we write code.

In Uncle Bob's book, "Clean Architecture", he brings attention to the fact that:

This implies that effective software uses a hybrid all 3 programming paradigms styles at different times.

While you could take a strictly functional or strictly object-oriented approach to writing code, understanding where each excels will improve the quality of your designs.

If all you have is a hammer, everything seems like a nail.

For functional programming, check out:

It's important to know how each of the paradigms work and how they urge you to structure the code within them, but with respect to architecture, Object-Oriented Programming is the clear tool for the job.

Not only does Object-Oriented programming enable us to create a plugin architecture and build flexibility into our projects; OOP comes with the 4 principles of OOP (encapsulation, inheritance, polymorhism, and abstraction) that help us create rich domain models.

Most developers learning Object-Oriented Programming never get to this part: learning how to create a software implementation of the problem domain, and locating it in the center of a layered web app.

Functional programming can seem like the means to all ends in this scenario, but I'd recommend getting acquainted with model-driven design and Domain-Driven Design to understand the bigger picture on how object-modelers are able to encapsulate an entire business in a zero-dependency domain model.

Why is that a huge deal?

At this point, you're understanding that Object-Oriented Programming is very useful for encapsulating rich domain models and solving the 3rd type of "Hard Software Problems"- Complex Domains.

But OOP can introduce some design challenges.

When should I use composition?

When should I use inheritance?

When should I use an abstract class?

Design principles are really well-established and battle-tested object-oriented best practices that you use as railguards.

Some examples of common design principles you should familiarize yourself with are:

Make sure to come to your own conclusions, though. Don't just follow what someone else says you should do. Make sure that it makes sense to you.

Just about every problem in software has been categorized and solved already. We call these patterns: design patterns, actually.

There are 3 categories of design patterns: creational, structural, and behaviour.

Creational patterns are patterns that control how objects are created.

Examples of creational patterns include:

Structural patterns are patterns that simplify how we define relationships between components.

Examples of structural design patterns include:

Examples of behavioural patterns are:

Design patterns are great and all, but sometimes they can an additional complexity to our designs. It's important to remember YAGNI and attempt to keep our designs as simple as possible. Only use design patterns when you're really sure you need them. You'll know when you will.

If we know what each of these patterns are, when to use them, and when to not even bother using them, we're in good shape to begin to understand how to architect larger systems.

Now we're at a higher level of thinking beyond the class level.

We now understand that the decisions we make towards organzing and building relationships between components at the high-level and the low-level, will have a significant impact on the maintainability, flexibility, and testability of our project.

Learn the guiding principles that helps you build in the flexibility that your codebase needs in order to be able to react to new features and requirements, with as little effort as possible.

Here's what I'd recommend learning right off the bat:

Uncle Bob discovered and originally documented many of these principles, so the best resource to learn about this is again, "Clean Architecture".

Architecture is about the stuff that matters.

It's about identifying what a system needs in order for it to be successful, and then stacking the odds of success by choosing the architecture that best fits the requirements.

For example, a system that has a lot of business logic complexity would benefit from using a layered architecture to encapsulate that complexity.

A system like Uber needs to be able to handle a lot of real time-events at once and update drivers' locations, so publish-subscribe style architecture might be most effective.

Projects with varying levels of components and wide-ranging functionality will either benefit or suffer from adopting a structural architecture.

Here are a few examples:

An example of cutting the concerns of an application vertically by using a layered architecture. Read here for more information on how to do this.

Depending on your project, messaging might be a really important component to the success of the system. For projects like this, message-based architectures build on top of functional programming principles and behavioural design patterns like the observer pattern.

Here are a few examples of message-based architectural styles:

A distributed architecture simply means that the components of the system are deployed separately and operate by communicating over a network protocol. Distributed systems can be very effective for scaling throughput, scaling teams, and delegating (potentially expensive tasks or) responsibility to other components.

A few examples of distributed architectural styles are:

Architectural patterns explain in greater tactical detail how to actually implement one of those architectural styles.

Here are a couple of examples of architectural patterns and the styles that they inherit from:

Any architectural pattern you choose will introduce a number of constructs and technical jargon to familiarize yourself with and decide on whether it's worth the effort to use or not.

Taking an example that many of us know, in MVC, the view holds all the presentation layer code, the controller is translates commands and queries from the view into requests that are handled by the model and returned by the controller.

Where in the Model (M) do we handle these things?:

If we simply use an ORM (object-relational mapper) like Sequelize or TypeORM as the model, all that important stuff to gets left to interpretation on where it should go, and it finds itself in some unspecified layer between (what should be a rich) model and the controller.

If there's something I've learned so far in my journey going beyond MVC, it's that there is a construct for everything.

For each of those things that MVC fails to address, there exist other enterprise patterns to solve them. For example:

Depending on the architectural style you've chosen, there are going to be a ton of other enterprise patterns for you to learn in order to implement that pattern to it's fullest potential.

Once your application is up and running, as you get more and more users, you might run into performance issues. API calls might take a long time, servers might crash from being overloaded with requests, etc. In order to solve these problems, you might read about integrating things like message queues or caches in order to improve performance.

This is probably the most challenging stuff: scaling, audits, and performance.

Designing a system for scale can be incredibly challenging. It requires a deep understanding of the limitations of each component within the architecture, and a plan of action for how to mitigate stress on your architecture and continue to serve requests in high-traffic situations.

The need also the need to audit what's going on in your application. Large enterprise companies need to be able to perform audits in order to identify potential security issues, understand how users are using their applications, and have a log of everything that's ever happened.

This can be challenging to implement, but common architectures end up looking event-based and build upon a wide range of software and system design concepts, principles, and practices like Event Storming, DDD, CQRS (command query response segregation), and Event Sourcing.

I hope that was useful to you!

Let me know if you have any suggestions or questions.

Fork it on GitHub