We all probably know Array.map. It transforms an array of elements according to a given function.

I’ve always seen it implemented along these lines:

This video exposed me to an alternative Array.map implementation. It’s from a 2014 JSConf — way before I jumped on the functional programming bandwagon.

Edit: David Cizek and Stephen Blackstone kindly pointed out edge-cases and suboptimal performance regarding this map implementation. I wouldn’t advise anyone use this in a real app. My intention’s that we appreciate and learn from this thought-provoking, recursive approach. ?

The original example’s in CoffeeScript, here’s a JavaScript equivalent.

Using ES6's destructuring assignment, we store the array’s first element into the variable head. Then we store all the other array elements into tail.

If head is not undefined we return a new array with fn(head) as the first element. We’ve now mapped the array’s first element. Alongside it is map(fn, tail) which calls map again, this time with one less element.

Since map returns an array, we use ES6’s spread syntax to concatenate it with [head].

Let’s step through this in the debugger. Paste this into your browser’s JavaScript console.

We see our local variables:

We know fn(head) is 2. That becomes the new array’s first element. Then we call map again with fn and the rest of the array’s elements: tail.

So before the initial map call even returns, we’ll keep calling map until the array’s been emptied out. Once the array’s empty, head will be undefined, allowing our base case to run and finish the whole process.

Since tail isn’t empty yet, hit the next breakpoint to call map again.

head is 3, and tail is an empty array. The next time this function runs, it’ll bail on line 3 and finally return the mapped array.

And here’s our end result:

Array.filter returns a new array based on the elements that satisfy a given predicate function.

If map made sense, this'll be easy.

We’re still capturing the array’s first element in a variable called head, and the rest in a separate array called tail.

And with the same base case, if head is undefined, return an empty array and finish iterating.

But we have another conditional statement: only put head in the new array if pred(head) is true, because filter works by testing each element against a predicate function. Only when the predicate returns true, do we add that element to the new array.

Let’s quickly expand and step through this in the Chrome console.

The predicate tests if x ≤ 10, so pred(1) returns true. That’s why we paused on line 4’s debugger statement.

Since the current head passed the test, it’s allowed entry into our filtered array. But we’re not done, so we call filter again with the same predicate, and now tail.

Move to the next debugger.

We’re on line 4’s debugger once again because because 10 ≤ 10. Move to the next breakpoint.

Since 20 > 10, pred(head) returns false and our filtered array won’t include it. We’ll call filter one more time without head.

This next time, however, filter will bail on line 2. Destructuring an empty array gives you undefined variables. Continue past this breakpoint to get your return value.

That looks correct to me!

Last but not least, Array.reduce is great for boiling an array down to a single value.

You’d get the same result with this recursive implementation:

I find this one much easier to read than recursive map and filter.

Let’s step through this in the browser console. Here’s an expanded version with debugger statements:

Then we’ll call this in the console:

We see our local variables:

acc: our initial value of 0

tail: the array’s other elements packed into a separate array, [2, 3]

tail: The array’s leftover elements. By always using tail, we keep cutting the array down until nothing’s left!

Move to the next debugger.

head: Remember how we passed the previous tail to reduce? Now that’s been destructured, with head representing its first element, 2.

tail: There’s only one element left, so 3’s been packed into an array all by itself.

We know the next reduce call will take a function, accumulator, and array. We can evaluate the next set of parameters using the console.

Expect these values on the next breakpoint.

Our local variables are as expected. head's first and only element is 3.

And our array only has one element left, tail's empty! That means the next breakpoint will be our last.

Move to the final breakpoint.

Check it out, we paused on line 3 instead of line 6 this time! head is undefined so we’re returning the final, 6! It’ll pop out if you move to the next breakpoint. 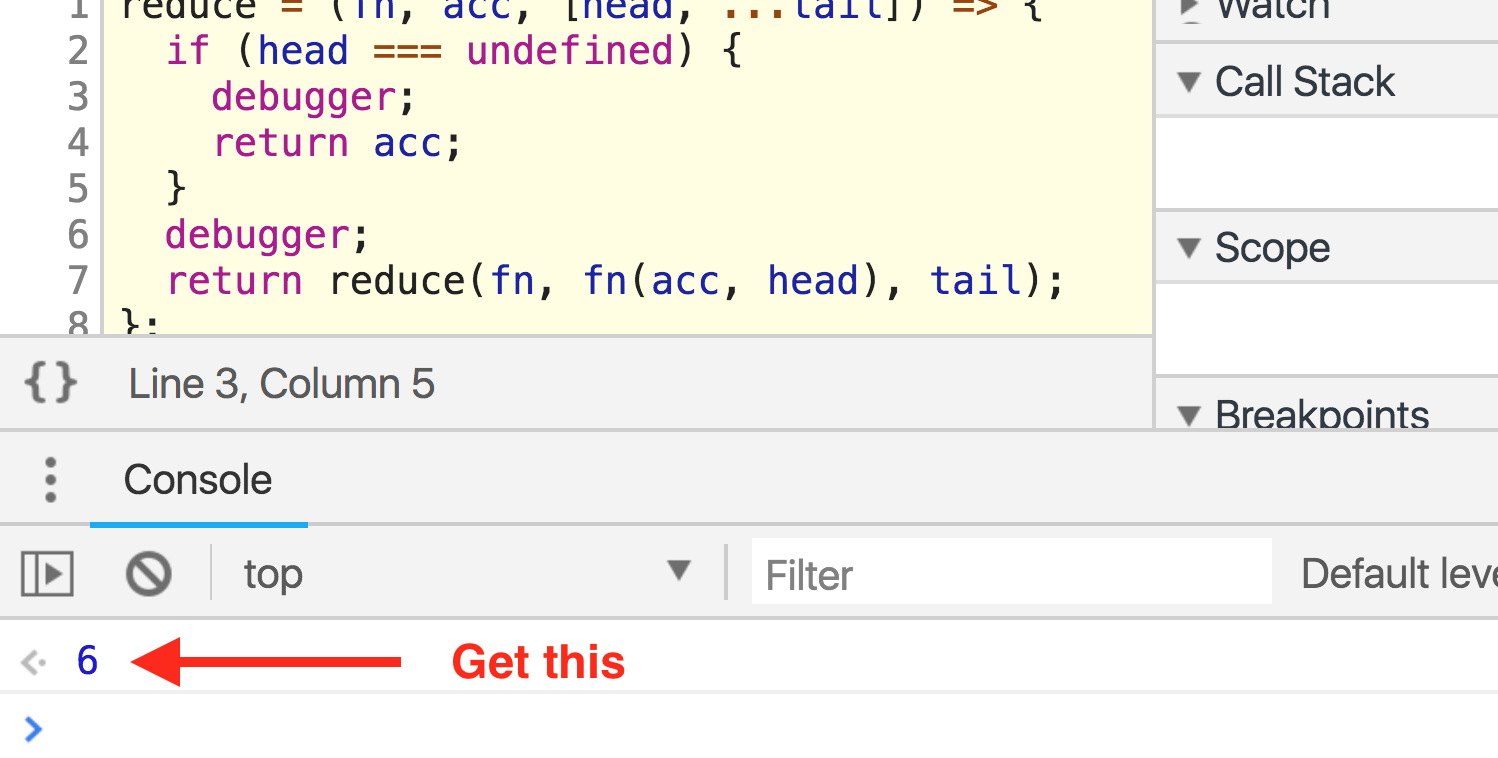 Looks good to me! Thank you so much for reading this.