Spend your Sunday (or any day) with the canvas element and JavaScript.

Recently during the JavaScript30 days challenge, I had the chance to get my hands dirty with the HTML inbuilt canvas property. What convinced me to write about the entire experience was the relative comfort level and learning curve.

In its simplest form, HTML canvas element enables a web developer to draw graphics on a web page, through javaScript, and this very aspect makes this HTML element far more interesting.

The <canvas> element is just a container — you would always use JavaScript to actually draw the graphics. One may argue that we can always have the points added or maybe an SVG for that matter, but again — what fun would that be? :D

Coming back to the <canvas> element: a canvas is a rectangular area on an HTML page. By default, a canvas has no border and no content.

Alright so much for the introduction. Let’s focus on building something fun using some plain old JavaScript, (not so old — ES6!). First, we’ll take a look at the starter files.

Let’s break it down. We have a stylesheet named style.css. Then we go about defining a canvas element with 800 width and 800 height. Lastly, we have a script tag named app.js where all the magic happens. On that note, lets start doing stuff with our very own app.js.

Now that we finally have our canvas in place, we move on to defining the most basic attributes of the canvas.

Now that we have all these pieces in place, let’s see how we can go about actually drawing on the canvas.

First, we need to add some event listeners for the mouse movement on canvas, and then trigger a function that would actually draw something on the canvas. Let’s take a look at the additions we may have in the app.js file.

Let’s break this down:

By declaring the isDrawing variable and setting its property to false, we set the initial state of the canvas as soon as the canvas element is loaded as not drawing. Then in every subsequent event listener, we use an inline function and change the value of the isDrawing function every time according to the type of event fired.

Let’s expand on that draw function:

We are only interested in the offsetX and offsetY property of this object.

Inside the ctx.lineTo, we have leveraged the event property offsetX and offsetY to get the latest point of X and Y in the canvas only to draw a line with ctx.lineTo.

We have pretty much everything in place. Every mouse event on the webpage draws a line on the canvas — but with some trouble and not much swag. So lets add some swag.

For now, all the lines are drawn from the 0 and 0 point in canvas. We set this as the initial set of points to start drawing from when we load the canvas or even when we execute the draw function.

Let’s fix this to have a better real time experience. If you think about it, the answer is very simple: every time the draw function is executed, we want the initial point to always be the offsetX and offsetY property of the MouseEvent object.

By using ES6 array destructuring, we can reset the values of lastX and lastY to be the offsetX and offsetY property of the MouseEvent object. We can do this at the very end of the draw function. Lets take a look at the app.js file after adding some swag in it.

Let’s make it colorful and add some dynamics in the stroke.

That is lot to handle, but let’s break it down.

In its simplest form, hsl lets us use the same rainbow of colors ranging between 0 and 360. Each number has a lightness and alpha value. Defining hsl looks something like this: hsl(173, 99%, 50%). Here number 173 represents a color — 99% is the lightness and 50% is the alpha value.

Again, by using some awesome ES6 backticks, we can leverage the hsl and influence it by doing something like this:

as we did on the line 7 in the above gist.

Next we increase the value of the hue variable which changes the color of the stroke with every mousemove event. Once the hue value has been incremented until 360, we reset the value of hue to be 0 on line 14 of the above gist. But even if we don’t do this, we will still have the same result. Even so, let’s just do the right thing. :D lol

Next, let’s add some dynamics to the width of the stroke being drawn every time, like this:

All we did here is first check if the current lineWidth is bigger than 75 or less than 1. If it is, then we reverse the value of the variable direction which is set to true as default.

Next we check if the value of the variable direction is true. If it is, then increment the value of lineWidth by 1, else reset the lineWidth to be 0.

That was not very much JavaScript. You should have your pretty canvas ready by now if you have been following along properly.

Let’s take a quick look at what the final file structure looks like. Since we only changed the app.js file, I’ll show you only that, as index.html remains almost unchanged since the beginning.

This is just the tip of the iceberg when thinking about the total power of the canvas element combined with JavaScript. I would encourage you to do a little more research and make the canvas look even better. Maybe add a couple of button’s to clear the screen, or maybe select a specific color to draw on canvas. So many options!

All I am saying is there are million ways to make this better. I’ll definitely update the story if I have anything worth updating.

Lastly, I’d like to leave you with a video of how the canvas would look like at the very end.

Hope you enjoyed reading all this! Any comments or suggestions to improve or discuss this further would really be appreciated. You can connect with me on twitter and linkedIn as well. 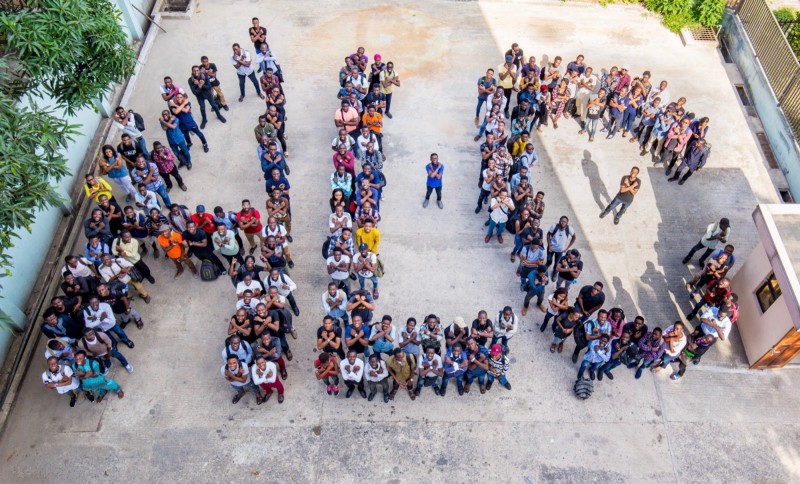