Writing CSS can be really difficult. Period. And I get it – it can be frustrating to nail down your own ideas or the designs you get from your design team.

I'm sure many of you have gone through the same pain at least a few times in your development careers.

Well not anymore. Because it's time to learn an interesting tool that takes away a lot of the burden from us. And no it's not Bootstrap – it's called Tailwind CSS.

While Tailwind has been around for a while now, you may not have come across it yet. Perhaps you just haven't heard about it, or you don't really know whether learning a new piece of tech related to CSS will really make your life easier.

And indeed there are a lot of ways to write CSS out there – like Vanilla CSS3, LESS, SCSS, Bootstrap, styled-components, Windi CSS, and more...phew. Quite a list isn't it?

I hope this short guide will help you understand Tailwind CSS and its benefits so that you can say "This is it. This is the one".

Well enough of the chit chat. Let's dive straight in.

What is Atomic CSS?

Before jumping into Tailwind CSS, let's understand what Atomic CSS is. According to CSS Tricks

"Atomic CSS is the approach to CSS architecture that favours small, single-purpose classes with names based on visual function."

It's kinda like making classes that are supposed to achieve a single purpose. For example, let's make a bg-blue class with the following CSS:

And here's the HTML:

So this HTML will result in something like this:

Now imagine writing such useful single-purpose CSS rules and keeping them all in a global CSS file. I know it's a one-time investment but think of this – you can now use these single-purpose helper classes from anywhere you want.

You just need your HTML file to consume that global CSS file, and that's it. You can now also use combinations of these helper classes in a single HTML tag.

Let's see another example shall we?

Let's create a CSS file with the following rules:

and then consume it in our HTML file as follows:

Well now this will generate the following result:

See how we were able to add different styles without even leaving the HTML page. Well, you might say, "Hey we did have to write those helper or utility classes in the global CSS file... what about that?" Well, I get it. That definitely was the initial investment we had to make to start with.

And of course, who knows how many of these single-purpose helper or utility classes we would have to make if we wanted to follow this Atomic CSS architecture.

And that's where Tailwind CSS comes in. The concept of Atomic CSS is not new but Tailwind CSS takes it to another level.

Tailwind CSS, as per their own website is a "utility-first CSS framework" which provides several of these opinionated, single-purpose utility classes that you can use directly inside your markup to design an element.

Some of the utility classes that I frequently use these days are:

You can get a list of all the utility classes Tailwind has to offer from the documentation page. Also if you are working in VS Code, you can install an extension called Tailwind CSS IntelliSense and it will give you auto-suggestions as you keep typing the utility classes, as shown in the image below.

How to Set Up Tailwind CSS

There are multiple ways you can set up Tailwind CSS in your project, all of which are mentioned in their documentation.

Tailwind CSS works smoothly with a plethora of frameworks like Next, React, Angular, and more – and even our OG HTML.

For the below hands-on demo I am using Tailwind CSS with a Next application. To set up a Next app with Tailwind CSS directly, use the following command:

Once the project has been set up, you can dive into the next step to create a basic card component

Let's build a card component in a Next project.

This results in the following card that gets rendered in the UI: 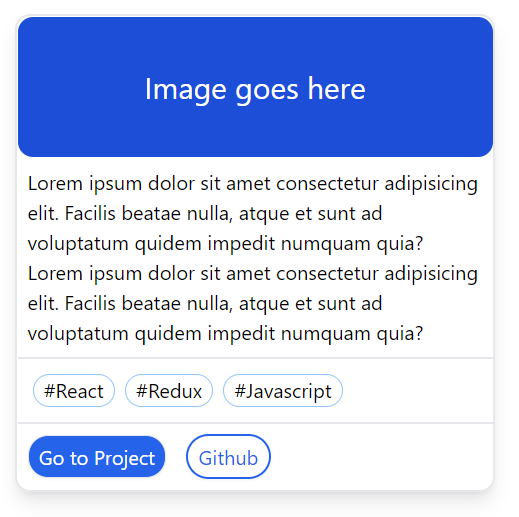 Look how easily I am able to style the card component without even leaving the Card.js file. No need to write any extra CSS files.

Using flex with a <div> applies display: flex; CSS rule to it. Want to add position: relative; to a <div>? Just add relative in the className and you are done.

We can also add different modifiers like hover, active, focus and so on to conditionally render utility classes. It is possible to apply complex CSS rules like this:

And do we have to mention these styles explicitly anywhere in some sort of a global CSS file? Absolutely not! Tailwind automagically does it for us. That's the beauty of Tailwind.

We are not done yet... there's a lot of other advantages. Let's look at them now.

Prior to Tailwind v3, it used to purge through all the styles to remove any unused styles, so that the production build remained as small as possible.

According to Tailwind, the production build used to be between 5-10 kB. But that's the story in production. In a development environment, CSS might get really big especially if we use a lot of personalized configuration.

With v3 and above, Tailwind released a new feature called the Just-in-Time compiler. The JIT compiler avoids compiling all the CSS upfront and compiles only the CSS as and when we need it.

This results in lightning-fast build times in all the environments. And as the styles are generated as and when we need them, there is no need to purge unused styles. This means that the CSS in all the environments will be the same. This helps us get rid of the fear of any important CSS getting purged in production.

It's opinionated and flexible at the same time

Tailwind CSS is opinionated. It does specify some constraints when it comes to styling, and if you ask me this is good as it helps us keep the design part to those who actually understand it.

Just look at one of the utility classes to add a box-shadow to your <div> (source):

As you can see, there are only 8 variants of shadow that Tailwind provides. There are preset values for vertical and horizontal offset, blur, spread, colour and opacity. That is why Tailwind is opinionated.

It tries to give an opinion about what property values to choose from on almost all the styling properties out there. And believe me, for most of the cases, these 8 variants (for box-shadow) will be more than sufficient to come up with a great UI.

For example in the above hands-on example, I have used shadow-lg in the main parent <div> to get that nice outer box-shadow.

Using the same variant of a particular utility class at different areas in the UI also ensures uniformity across the whole application and results in a better UX.

But in case you need some really customised value for any particular style, you can get that by adding a customized theme in the tailwind.config.js. For example to get a shadow-3xl (Tailwind does not provide shadow-3xl out of the box) you can add the following lines in the module.exports in tailwind.config.js:

And now with the advent of JIT, you can also use an arbitrary value inside square brackets [] like the following:

Using arbitrary values may be useful when you need a specific style at only a few places. And in this case, creating a theme for it in the tailwind.config.js might seem unnecessary.

I really hope that I was able to make you understand what Tailwind CSS is and what you can do with it.

Tailwind is a CSS framework that provides us with single-purpose utility classes which are opinionated for the most part, and which help us design our web pages from right inside our markup or .js/.jsx/.ts/.tsx files.

In my opinion, Tailwind is simple and easy to understand. It's true that it might take some time to get the hang of all the utility class names, but don't worry – you can refer to their documentation whenever you get stuck.

And to all the beginners out there who are just starting their journey with web development, it is very important to know what CSS3 is before you even explore Tailwind (or for that matter any other CSS framework like Bootstrap, Windi CSS, and so on).

Thanks for reading! I really hope you enjoyed reading about Tailwind CSS in this article and found it useful.

Do consider sharing it with your friends, I'd really appreciate that. Follow me on LinkedIn and Twitter (see below) and stay tuned for more amazing content. Peace out! 🖖