In this article, I'm going to explain how to automatically upload an Android App Bundle (.aab file) to the Play Store's beta track. We'll use Android Studio and AWS as a cloud infrastructure provider.

This is a valuable use of your time for a number of reasons, like creating observability and prioritizing processes.

Here are the resources we are going to be using for this tutorial:

High Level Overview of the Project 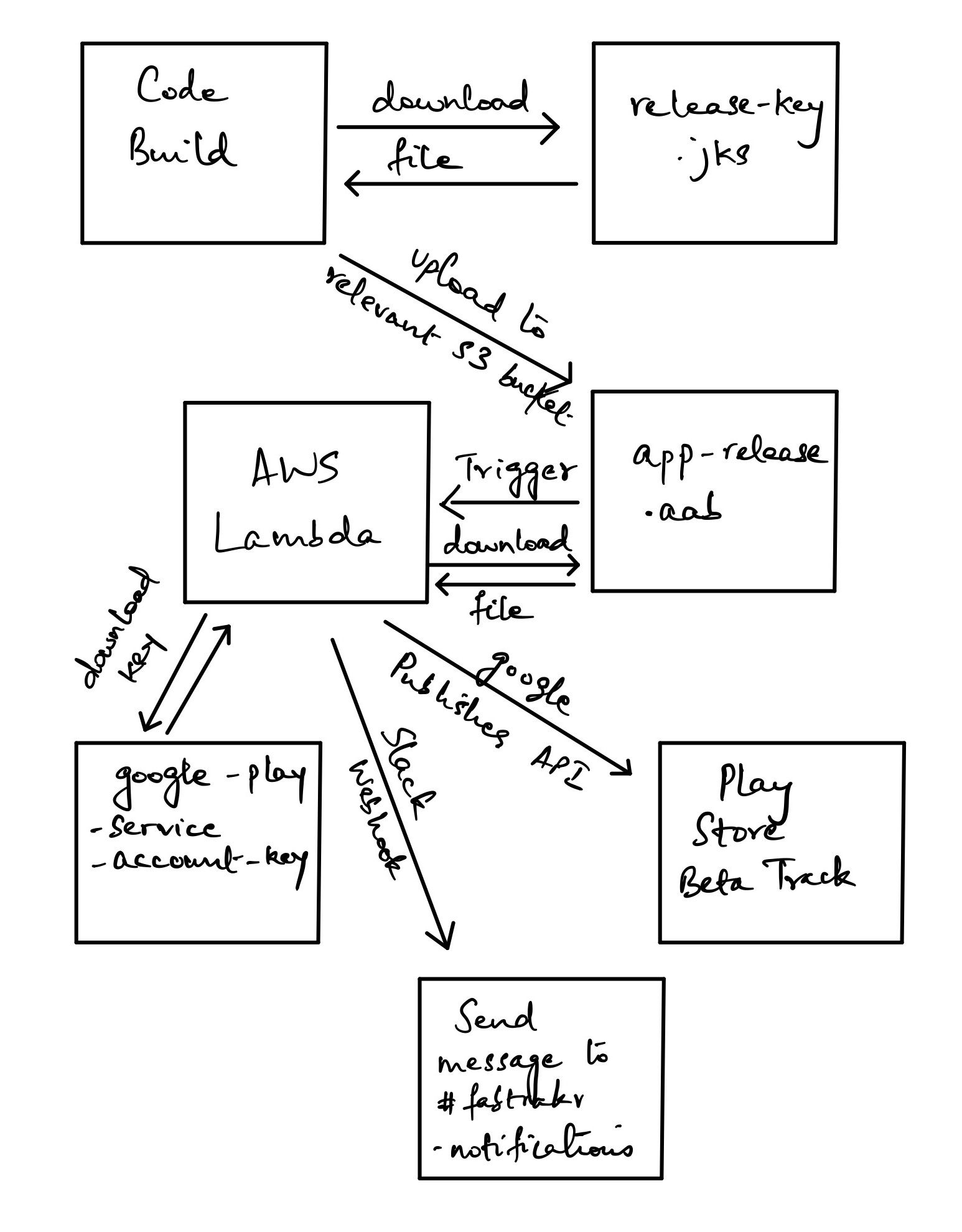 The above image shows you a general overview of how we'll structure the whole thing.

Essentially, there needs to be a Code Pipeline set up on AWS for your Android repository. This Code Pipeline will have Code Build as one of its stages.

Pushing to the master branch of your Android app repository is going to trigger Code Build. The Code Build project will sign the Android app from the command line and upload the artifact to an S3 bucket.

Uploading the bundle to S3 will trigger a Lambda, which will download the bundle and upload it to the Play Store using the Google Publishing API. Once it gets a 200 response, the Lambda will then trigger a Slack notification.

How to Get Your Google Play Service Account Key

To be able to use the Google Play Publisher API, you will need a Google Play Service Account key.

A service account is an account that can act on your behalf when servers are communicating with each other. You can read more about how Google uses OAuth2.0 for server to server communication here.

To see how to create a service account and give it access to the Google Play Publisher API, look here.

Once you've created your service account and given it the appropriate permissions, make sure to download the service account key and keep it safe. You'll be uploading this to an S3 bucket soon.

The main thing to figure out is how to sign the Android App Bundle. Google has fairly decent documentation on it that you can find here.

I'll summarize the links below.

You can call your key whatever you want. Here, I called it my-release-key.jks. You can also choose whatever alias you want. Throughout this tutorial make sure to use the correct name and alias for your key.

Open build.gradle within your app directory in Android Studio and add the following code block to it:

If you changed the name of your release key to something other than the default, make sure to specify the new name. Same thing for the alias.

Your store password will be whatever password you generated when you first uploaded your app to the Play Store.

Now, when you run the command ./gradlew :app:bundleRelease from the command line in Android Studio, you'll notice that it generates a signed App Bundle.

How to Scrub Signing Information

Committing code with the signing information available as plain text in the build.gradle file is a security risk and could be an attack vector.

Google has documentation around this that you can find here.

First, create a keystore.properties file in the root of your project directory.

The contents of the file should be as below:

Your keyAlias and storeFile will be the alias you assigned when creating your private key and the location of the private key you created, respectively.

Now, we need to load this file into build.gradle. This came as a surprise to me initially, but Gradle actually works as a DSL. So, it makes it easier to write configuration using Gradle.

You'll notice the if condition in there – don't worry about it for now. It's there specifically to account for Code Build later.

Once you do this, change your signingConfigs section in build.gradle to look like this:

How to Set Up AWS Code Pipeline

I'm not going to go into too much detail on this one since its relatively straightforward.

Set up an AWS Code Pipeline with the following three stages:

You can find more documentation about setting up a Code Pipeline here.

How to Set Up AWS S3

First, make sure you have a Code Pipeline set up with Code Build as one of the stages. Next, set up two S3 buckets:

Head over to the IAM console and find your Code Build service role and grab the ARN.

Next, use the console to get to the Permissions tab for the bucket release-key.jks and add the following policy there:

This policy will allow access to the S3 bucket from the machine where your CodeBuild project will execute.

You will need to replace the ARNs mentioned above with the ARNs for your account. Make sure to specify the correct ARN for the Code Build service role when you're updating the policy.

You don't need to change the permissions policy for the second bucket. We'll add the relevant permissions to the AWS Lambda role to allow it to access the bucket.

How to Set Up AWS CodeBuild

Next, create a buildspec.yml file in your project root folder.

This file is pretty simple. It fetches the release key from the bucket specified and saves it into a local file on the Code Build server into the location specified.

Next, export all the variables required for the build.gradle configuration to work correctly. Finally, run Gradle's release command from the command line.

Before you can run this script in Code Build, you'll need to add the variables to the Code Build environment. To do this, first go to the AWS Code Build console and pick your build project for your Android app.

Next, select Edit > Environment like in the screenshot below:

On the screen that pops up once you do this, select the Additional Configuration dropdown. There you'll see an option to add environment variables through key value pairs.

Now when Code Build runs the buildspec.yml file, it will be able to export the specified variables.

As things stand right now, when your pipeline runs, Code Build will be able to download the private key to sign and build your Android app and upload the signed bundle to an S3 bucket.

How to Set Up the Slack App

Observability is a hallmark of automation. You want to know when your automation runs, whether it succeeds or fails, and if it fails, the reason for failure.

The way AWS typically handles observability is through CloudWatch. But I think a Slack integration serves the purpose just as well.

To learn how to set up a Slack app, view the documentation here. The process is super easy and you should have an app up and running in a few minutes.

Once you've created the app, you will get a WebHook URL you can use to call the app to post into the relevant channel. Keep track of this WebHook URL because we'll be using this with the AWS Lambda function.

How to Set Up AWS Lambda

So far, we have an Android App Bundle being signed, built, and uploaded to an S3 bucket. Next, we need to figure out how to upload the bundle to the beta track on the Play Store.

The way to do this is to set up an AWS Lambda which will be triggered when the bundle is uploaded to the S3 bucket. When this trigger occurs, the Lambda will run, download the bundle, grab the service account key, and upload the bundle to the Play Store beta track.

Once you've created a Lambda and added a trigger to run it when a file is uploaded to the bucket, look at the code below:

The Lambda above will use the googleapiclient library and its discovery module to build the URL for Google Play's Publishing API.

Next, the Lambda will download the service account key from the bucket you set up earlier. You'll have to make sure you specify the correct bucket names.

If your Lambda fails, it might be because your Lambda does not have permissions to access the S3 bucket where the key for your Google Play service account is stored. In that case, you will see an error message indicating this.

To fix this, you simply need to add the relevant permissions to your Lambda role.

Here is the policy you will need to add:

Replace the ARN for the bucket with the relevant one for your account and you should be good to go.

So, there you have it. It definitely wasn't easy and there's a lot of moving parts, but this is an automation that will save you a lot of time and effort.

If you're part of a team that is frequently releasing new app updates, you don't want to be hindered by the absence of one person whose job it is to release the update.

Building this sort of automation makes your CI/CD workflow a lot smoother and more robust.