The biggest problems with token models: what to do when equity is stealing the token’s value

As part of the senior analyst team at AmaZix I spend a large part of my time reading through hundreds of projects’ whitepapers. I do in-depth due diligence to determine whether or not their tokens will be good investments. In doing this, one of the most important factors we look at is the project’s token economic model. This is to discern how much of the value created by the project is being captured by the token.

This is extremely important. The value captured by a token is essentially its utility or intrinsic value. This ensures that the token’s price grows alongside adoption/success of the underlying project. A token lacking utility will see its price supported only by speculation. It is very likely to fail in the long-run. For more on this, see my earlier blog, in which I discussed the importance of token economic models in ensuring a token’s long-term value.

In this blog and the next, I’ll discuss the two most common problems we see with token economic models. I will also explain why they matter and also some of the solutions we recommend to our clients.

What is a token economic model and why does it matter?

If you’re a seasoned crypto investor or understand what a token economic model is, feel free to skip this part.

Before we start talking about token economic models, it may be wise to start at the very beginning. What is a token and what makes up its value?

A token is a crypto-economic unit of account that represents or interacts with an underlying value-generating asset. A token’s value is made up of its intrinsic value and its speculative value. The intrinsic value is the percentage of the token’s value that derives from demand for the underlying asset. The speculative value is the percentage of the value of the token that derives from demand due to an expectation of future price increases.

While speculation is nice, it is hard to control/predict. It puts projects at the mercy of short-term-oriented investors, like our friend below:

Rather than focus on speculative value, we recommend investors focus on intrinsic value. A token’s intrinsic value is dependent on two factors: the value created by the underlying asset and the percentage of this value which is captured by the token.

The token economic model is what determines the latter — how much of the value created by the platform is captured by the token. As such, it’s one of the primary determinants of a project’s utility value and long-term success.

Problem 1: Projects where equity is “stealing” value from the token

In my earlier blog, I suggested that there was an inverse relationship between the value of a project’s equity and the value of its token. They are effectively competing to capture the value created by the project.

Most of the biggest projects such as Bitcoin and Ethereum aren’t companies. They do not have shareholders. They only have token-holders instead. As such, there is no conflict of interest. Their token economic models seek to maximize value for token-holders.

However, this is not the case for many ICO’s which are limited companies, often with investors. They possess both shareholders (venture capitalists and founders) as well as token-holders (ICO investors and founders).

This creates a moral hazard. The founders of these projects will also possess both equity and tokens. They will often possess a higher percentage of the total equity than of total tokens. (A traditional seed round is 10–25% whereas an ICO is generally 40–60%).

More importantly, founders have a legally enforceable fiduciary duty to their investors. They are obligated to act on behalf of their shareholders (read: maximize value for their shareholders) without a conflict of interest.

Together, these factors create a perverse set of incentives. Founders are encouraged to prioritize the interests of shareholders over token-holders. They distribute the value created by their platforms to shareholders rather than token holders. (For an example of this, see my earlier piece on Ripple.)

This is a serious and overlooked issue, especially when ICO’s are making capital investments that benefit shareholders using the millions of dollars they raised in an ICO but then distributing the returns on those investments to shareholders rather than token-holders.

The way this most commonly manifests is through projects charging their customers some kind of fee (either in FIAT or in the project’s native token). Then using the revenue generated by this fee “to pay for the maintenance of the project”.

The word “maintenance” implies salaries and operational costs. There is nothing to prevent these fees being paid out as dividends to the company’s shareholders. (And the fact that investors continue to invest in blockchain companies’ equity indicates they believe these cash flows are or will eventually be paid out as dividends).

Another way in which this manifests is in companies using ICO proceeds to purchase cash flow generating assets which are however not legally owned by token-holders, leaving them with little downside protection.

For instance, most blockchain real-estate fund tokens use ICO proceeds to purchase real estate pay token-holders a given yield on these assets. Shockingly, this yield is generally comparable to the yield received on purchasing equity or bonds in similar publicly listed real estate funds. However, the yield on the token should actually be much higher than the yield on equity/bonds as token-holders, unlike equity and bond holders, have no downside protection.

Indeed, it’s worth remembering that these funds are legally owned by their shareholders. In many cases, these funds will also take on additional debt to finance purchases and will therefore also have obligations to bondholders. Thus, in a scenario in which these companies are facing bankruptcy and go into liquidation, bondholders and equity-holders will be paid first with token-holders either being paid last (in which case they will receive pennies on the dollar) or not being paid at all.

Many of these funds tout themselves as being “real estate backed”. But unless they are a structured security token offering which specifies the legal status of token-holders, investors in these funds’ token would be better off investing in real estate bonds or equities where they can enjoy similar upside with added downside protection.

This doesn’t only apply to real estate funds but also to cloud mining projects, projects developing commercial IP, and generally any projects using funds from an ICO to make capital investments into assets which will be legally owned by shareholders rather than token-holders.

Solutions here all involve tweaking the token model such that value is transferred from the company’s equity to its token and aligning incentives between founders and token-holders. This can be done in several ways:

Both of these involve giving the token a “yield” and transferring value from the equity to the token.

In the case of the token “buy-and-burn”, this was initially suggested by Vitalik and has been widely adopted since. Basically, it involves designing token models with “buy-and-burn” mechanisms in which the project uses some or all of the cash flows generated by its platform to purchase its own tokens and destroy them. The decrease in supply raises the value of all remaining tokens by the percentage of total supply destroyed.

Effectively, the project is distributing its cash flows to its token-holders, very similar to how an equity distributes cashflows to its stockholders through a dividend.

An example of this is Iconomi, a digital asset management platform which burns preset percentages of all fees collected and also produces quarterly reports outlining the number of tokens burned (crypto quarterly earnings reports).

A profit-share is very similar in spirit to the “buy-and-burn” in that it is providing the token with a yield and turning it into an asset that generates cash flows. This was initially suggested by Kyle Samani of Multicoin.

Ideally, token models should ensure that companies burn/profit share as high a percentage as possible of the cash flow they’re generating in fees in order to ensure the value they’re creating accrues to the token.

(2) Founders should be paid alongside token-holders

Projects raising money in ICO’s should not be paying dividends to shareholders, as this poses a significant conflict of interest.

In an ideal scenario, founders of a crypto project should not receive salaries either but rather be paid through the yield generated by their token ownership.

This is the case with Rialto, for instance, in which both team members and token-holders are paid through a bi-yearly dividend. While this is ideal as it maximally aligns incentives between founders and token-holders, it’s not always possible. Some crypto projects, like startups, will take time to reach profitability and the team must be able to survive in the meanwhile. In this case, transparency becomes paramount, which brings me to my next point.

Companies that raise money through ICO’s should be extremely transparent about all aspects of their project, including investors associated with the project, whether these investors received equity or tokens, how much they received, salaries they intend to pay themselves and any other operational costs they’ll be paying out.

For an example of this done well, check out page 26–30 of Essentia’s whitepaper. It’s worth remembering that all costs must be deducted from the cash flows generated by the platform in order to arrive at the value which actually accrues to the token. After all, cashflows going towards paying salaries/rent are cash flows that are not being distributed to token-holders through a token burn/profit share.

This information should be provided in the whitepaper (similar to the information a VC would expect in a seed/series A round) and should also be updated regularly once the ICO is completed.

Hopefully, in the future, a standard will emerge for ICO’s, similar to the GAAP accounting standards for quarterly earnings reports that govern public companies. In them, ICO’s would be forced to update investors in a given format on key aspects of the project’s performance.

Until that time comes, we must self-regulate this by voting with our money and rewarding projects with better transparency with higher valuations. For an example of a project doing it right, check out Iconomi’s quarterly reports.

In the case of real estate funds and other security type offerings, these should be avoided unless they’re legally recognized security token offerings that clearly specify the token-holders’ legal status. This is particularly true in the case of bankruptcy or liquidation and as relates to other stakeholders such as bond and equity holders. Investors should also demand additional transparency from these types of projects, such as regular balance sheet updates.

Many of these issues can also be resolved by having good governance models built into the token that allows token-holders to vote on key issues, including asset allocation.

For instance, a project’s assets can be held in escrow in a smart contract allowing token-holders to vote to liquidate and distribute all assets pro-rata to token-holders.

While this is currently impossible for assets other than cryptocurrencies, there are many projects working on registering and “tokenizing” real estate, gold, intellectual property and all sorts of other assets which will then be able to be placed into smart contracts.

The token economic model design is an extremely important and underrated area for both investors and founders of cryptocurrency projects to think about. A project with a weak token economic model may see its token price fail, even as the project itself succeeds, simply because the token is not capturing any of the value created by the project.

Stay tuned for my next blog where I’ll cover the other biggest problem with token models: high velocity.

If you’re interested in having your project’s token economics audited or discussing this further, feel free to get in touch with me through here or on Twitter. 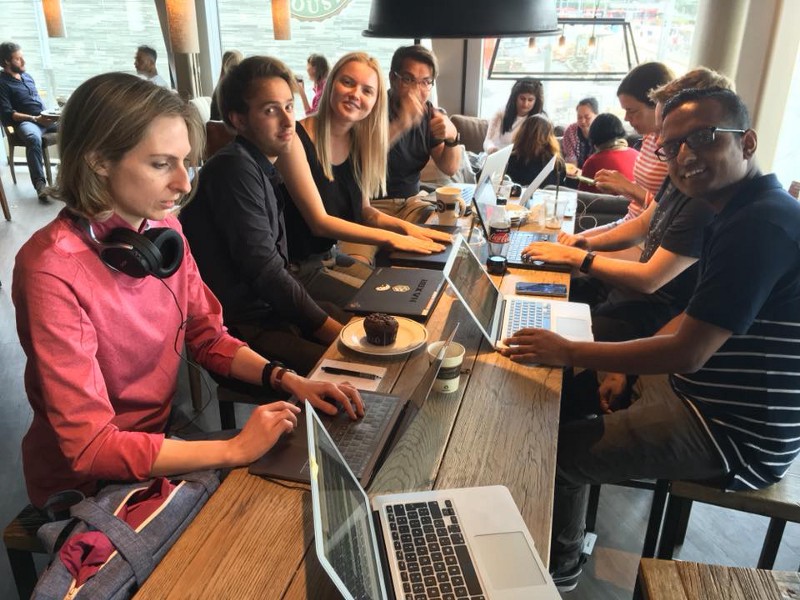