Hello everyone, today we will talk about Ansible, a fantastic software tool that allows you to automate cross-platform computer support in a simple but effective way.

Ansible is a tool that generates written instructions for automating IT professionals' work throughout the entire system infrastructure.

It's designed particularly for IT professionals who use it for application deployment, configuration management, intra-service orchestration, and practically anything else a systems administrator does on a weekly or daily basis.

Ansible is simple to install because it doesn't require any agent software or other security infrastructure.

While Ansible is at the cutting edge of automation, systems administration, and DevOps, it's also valuable as a tool for devs to use in their daily work.

Ansible allows you to set up not just one machine but a complete network of them all at once, and it doesn't require any programming knowledge.

How Does Ansible Work?

Ansible connects to nodes on a network (clients, servers, etc.) and then send a little program called an Ansible module to each node.

It then runs these modules through SSH and deletes them once they're done.

Your Ansible control node must have login access to the managed nodes for this interaction to work.

The most frequent method of authentication is SSH keys, but alternative methods are also allowed.

If you want to see how to install and start using Ansible, we'll cover that below.

Now let's take a look at Ansible's architecture and how it manages operations.

Plugins are supplementary pieces of code that enhance functionality, and you've probably used them in many other tools and platforms. You can use Ansible's built-in plugins or create your own.

Modules are short programs that Ansible distributes to all nodes or remote hosts from a central control workstation. Modules control things like services and packages and can be executed via playbooks.

Ansible runs all of the modules needed to install updates or complete whatever operation is required and then removes them after they're done.

Ansible uses an inventory file to track which hosts are part of your infrastructure and then accesses them to perform commands and playbooks.

Ansible works in parallel with various systems in your infrastructure. It accomplishes this by picking methods mentioned in Ansible's inventory file, which is saved in the host location by default.

Once the inventory is registered, you can use a simple text file to assign variables to any of the hosts, and you may retrieve inventory from a variety of sources.

IT professionals can use Ansible playbooks to program applications, services, server nodes, and other devices without starting from scratch. Ansible playbooks, along with the conditions, variables, and tasks included within them, can be stored, shared, and reused forever.

Playbooks are at the heart of what makes Ansible so popular. They specify activities that can be completed quickly without requiring the user to know or remember any specific syntax.

In a more extensive or more uniform system, Ansible may be a better fit. It also provides a set of modules for managing various methods and cloud infrastructure.

Why is Ansible so important?

Modernization and digital transformation require automation that's both necessary and purposeful. We need a new management solution in today's dynamic contexts to increase speed, scale, and stability throughout IT infrastructure.

Technology is our most potent instrument for product improvement. Previously, accomplishing this required a significant amount of manual labor and intricate coordination. But today, Ansible - a simple yet powerful IT automation engine used by thousands of enterprises to simplify their setups and speed DevOps operations - is available.

How to Install Ansible on Ubuntu

Run the following commands to configure the PPA on your machine and install Ansible:

You should have something similar to what is shown below: 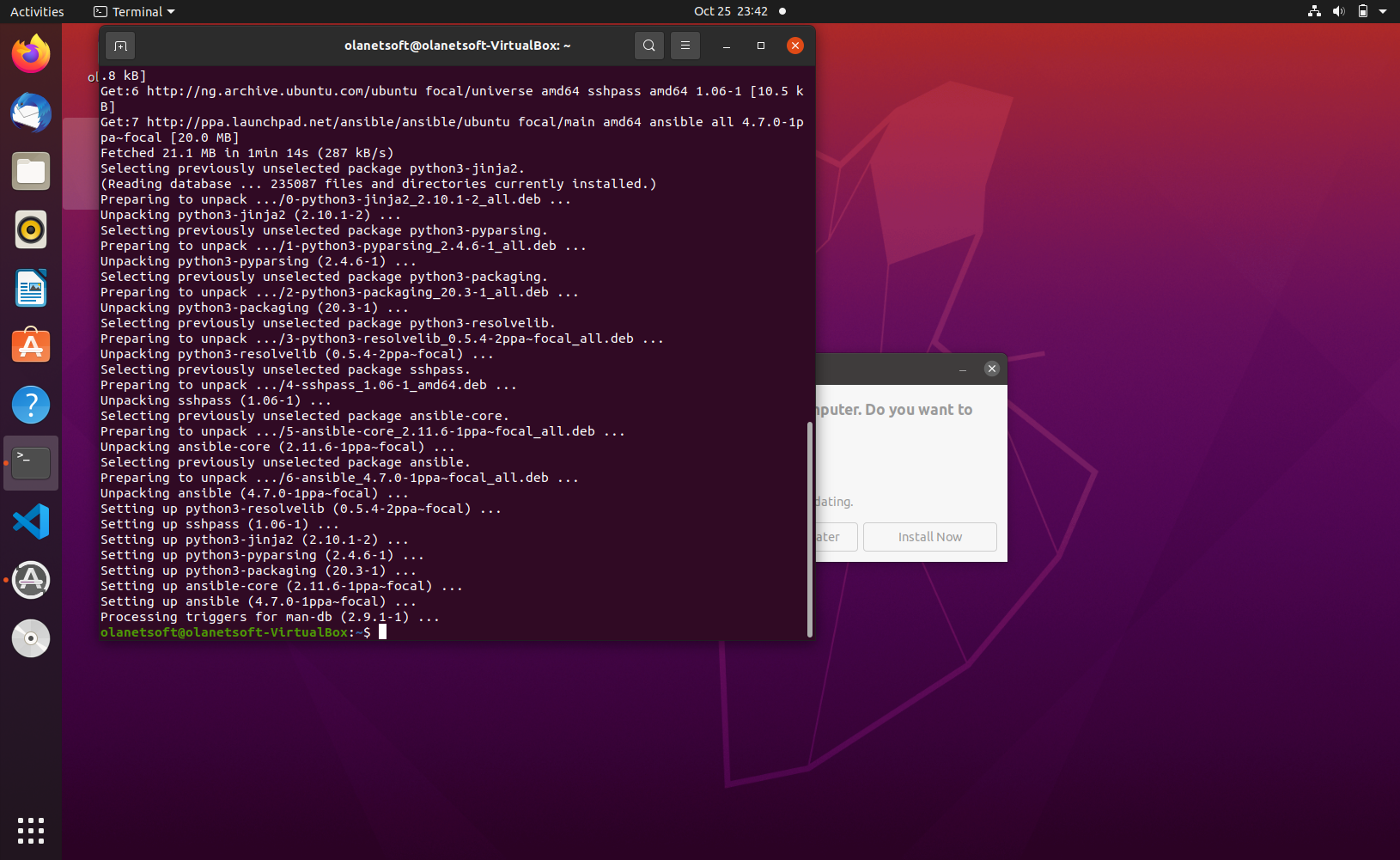 Now that you have successfully installed Ansible, let's test if it's working by using the command below: 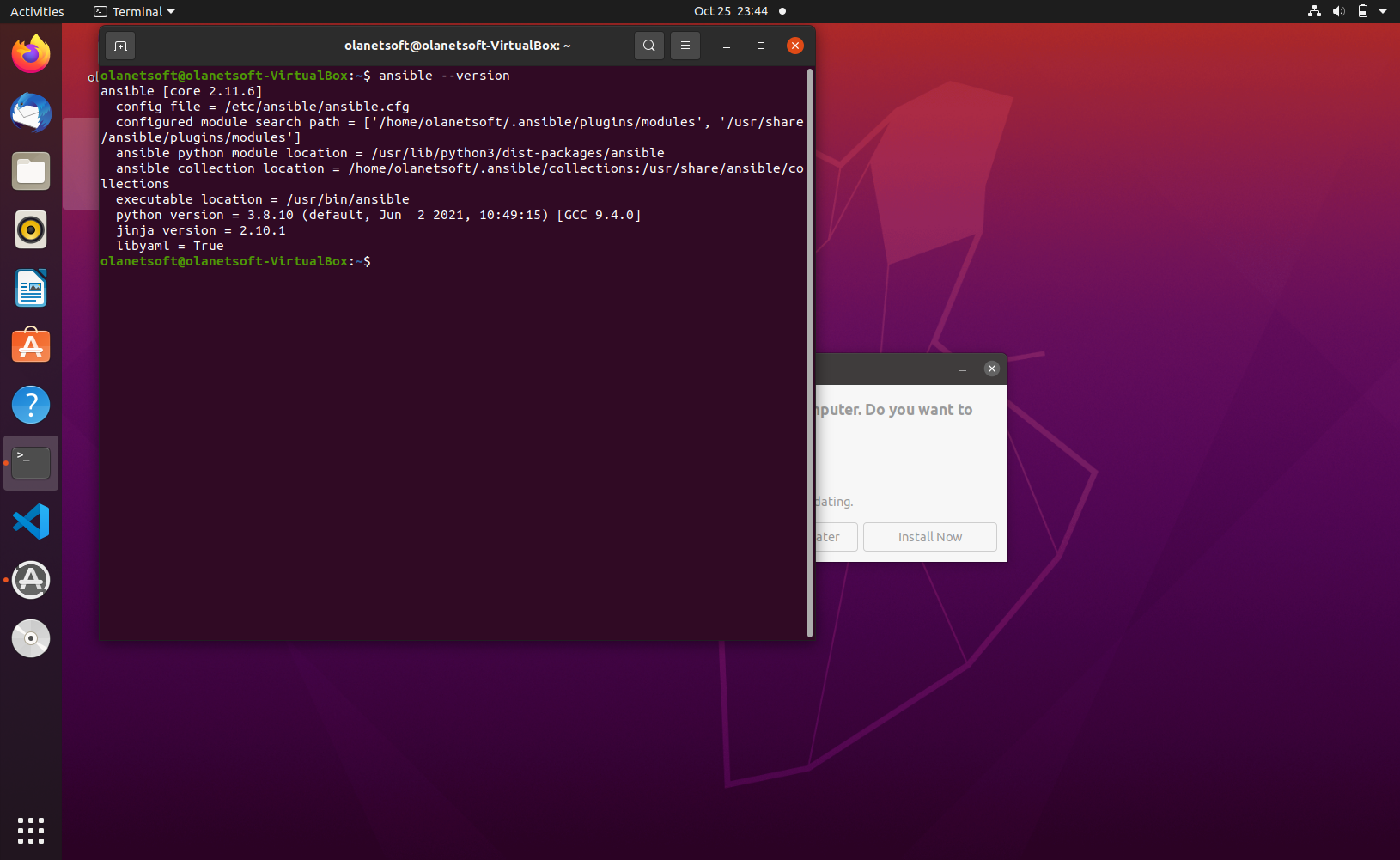 We'll use the command below to instruct Ansible to target all systems for the inventory host localhost, and we'll run the module ping from your local console (rather than ssh).

You should get a response similar to what you can see below: 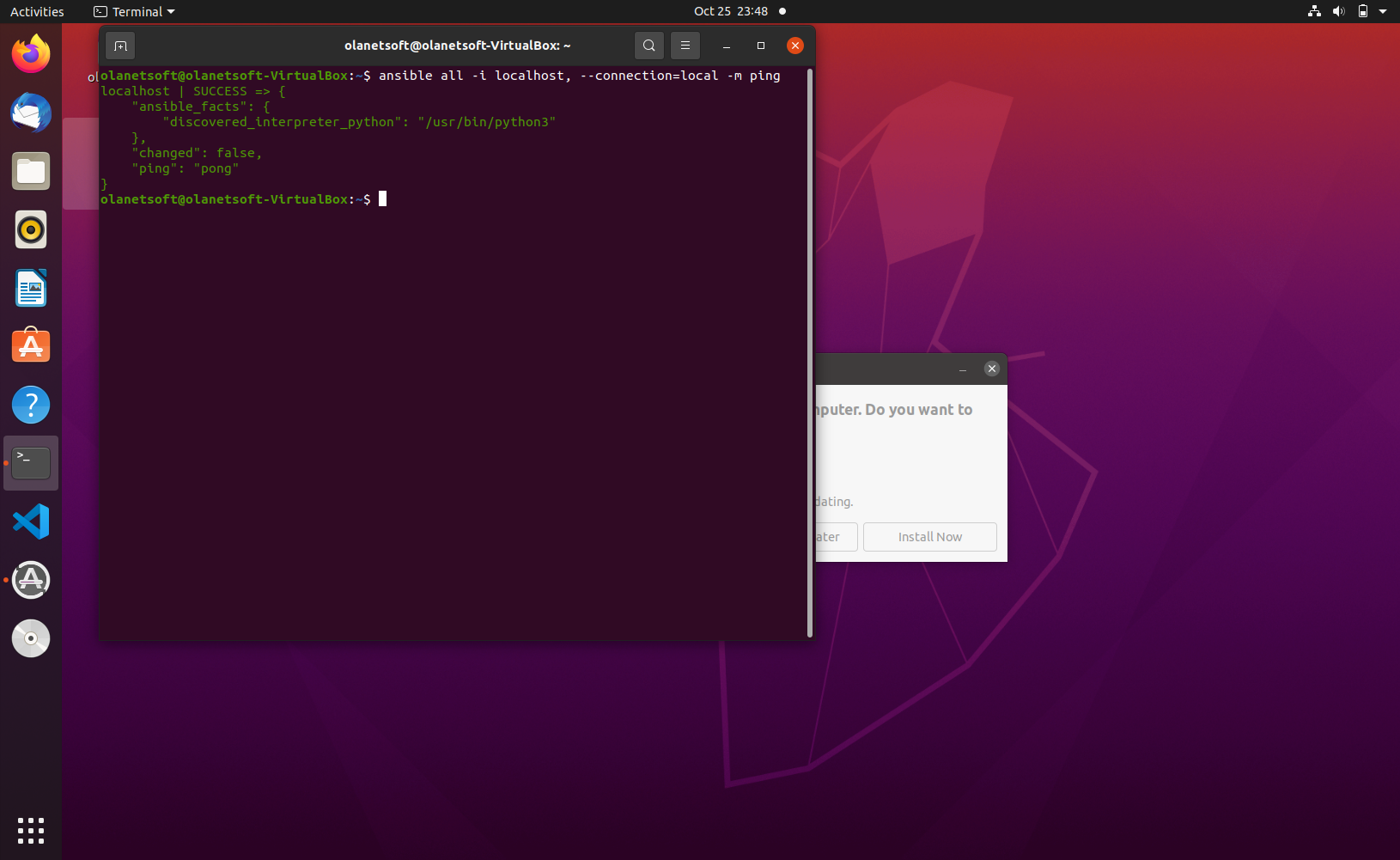 How to modify the hosts that Ansible targets

We'll make changes to the host's file in /etc/ansible/hosts. This is the default file where Ansible searches for any defined hosts (and groups) where the given commands should be executed remotely.

Add the lines below to the file and save the modifications:

Execute this command with your adjusted inventory file:

The response should look similar to what we have below: 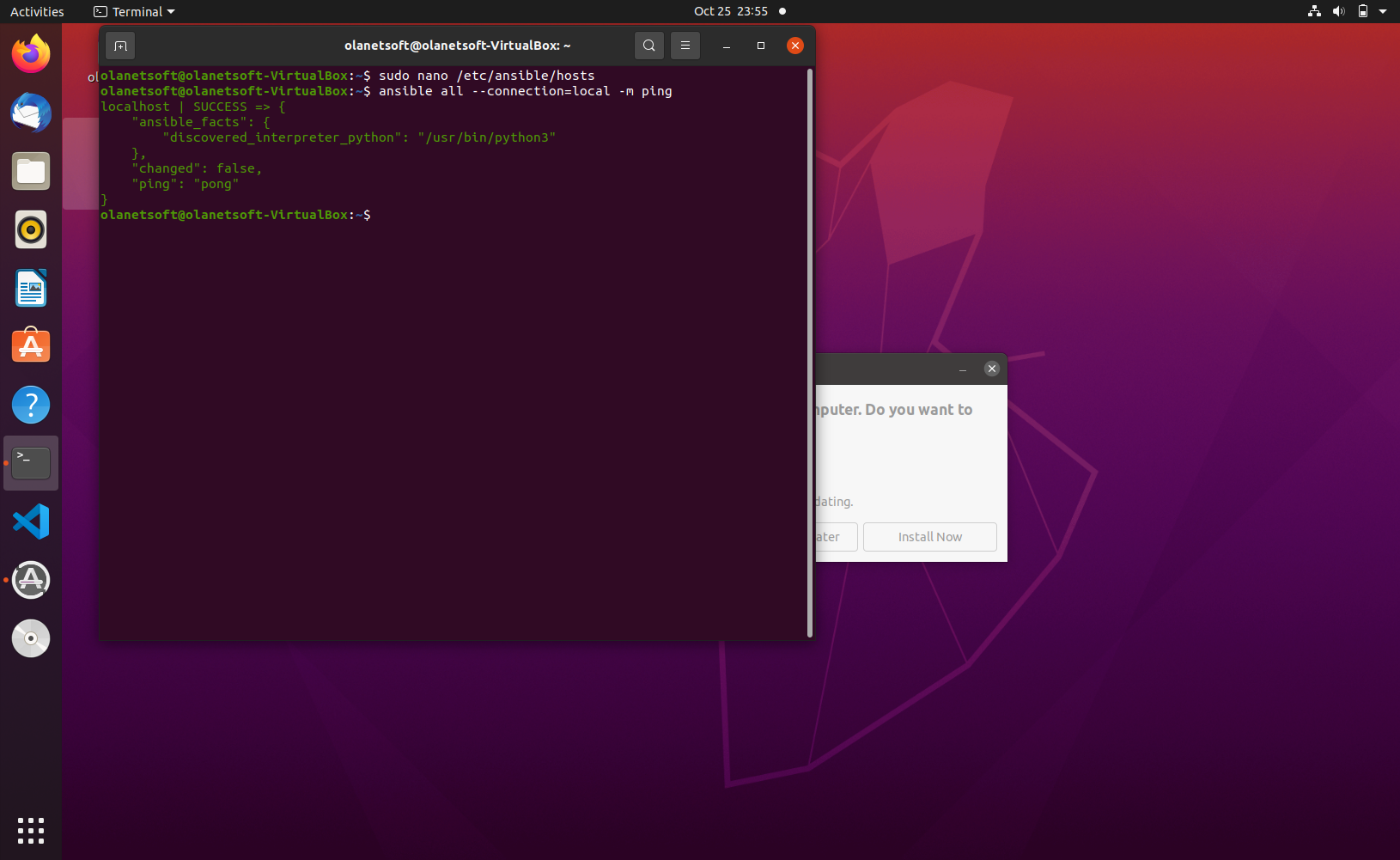 How to configure a remote server

We deploy our Ansible test program to our remote server using a Digital Ocean droplet.

Use the command below to ssh into the server:

Note: we have already configured an ssh key in our profile, which was selected when creating the droplet. 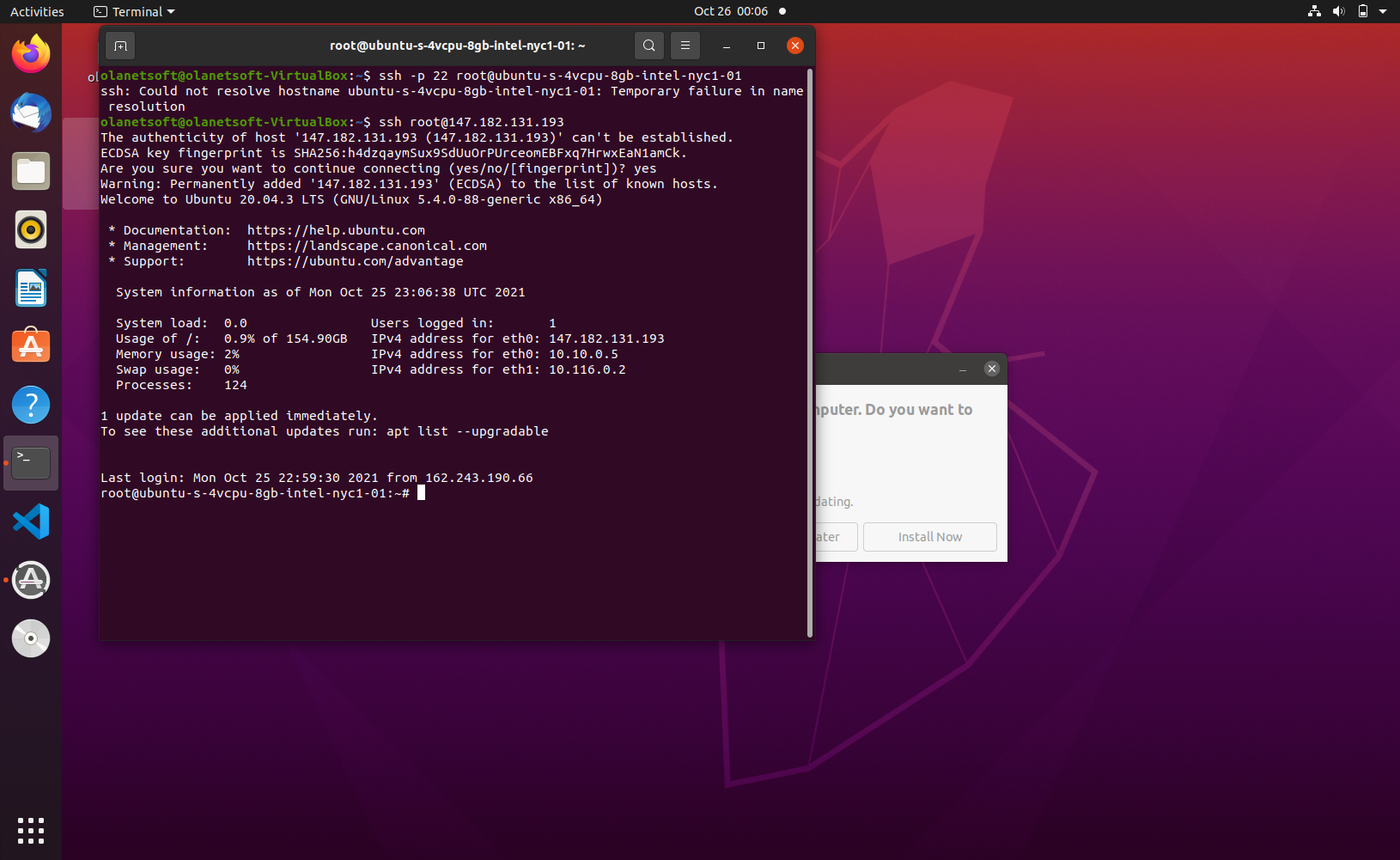 How to configure Ansible for a remote server

We will edit our hosts file in /etc/ansible/hosts using the command below:

Add the lines below to the file and save the modifications:

To see if Ansible can connect to your remote compute instance over SSH, let's type the following command: 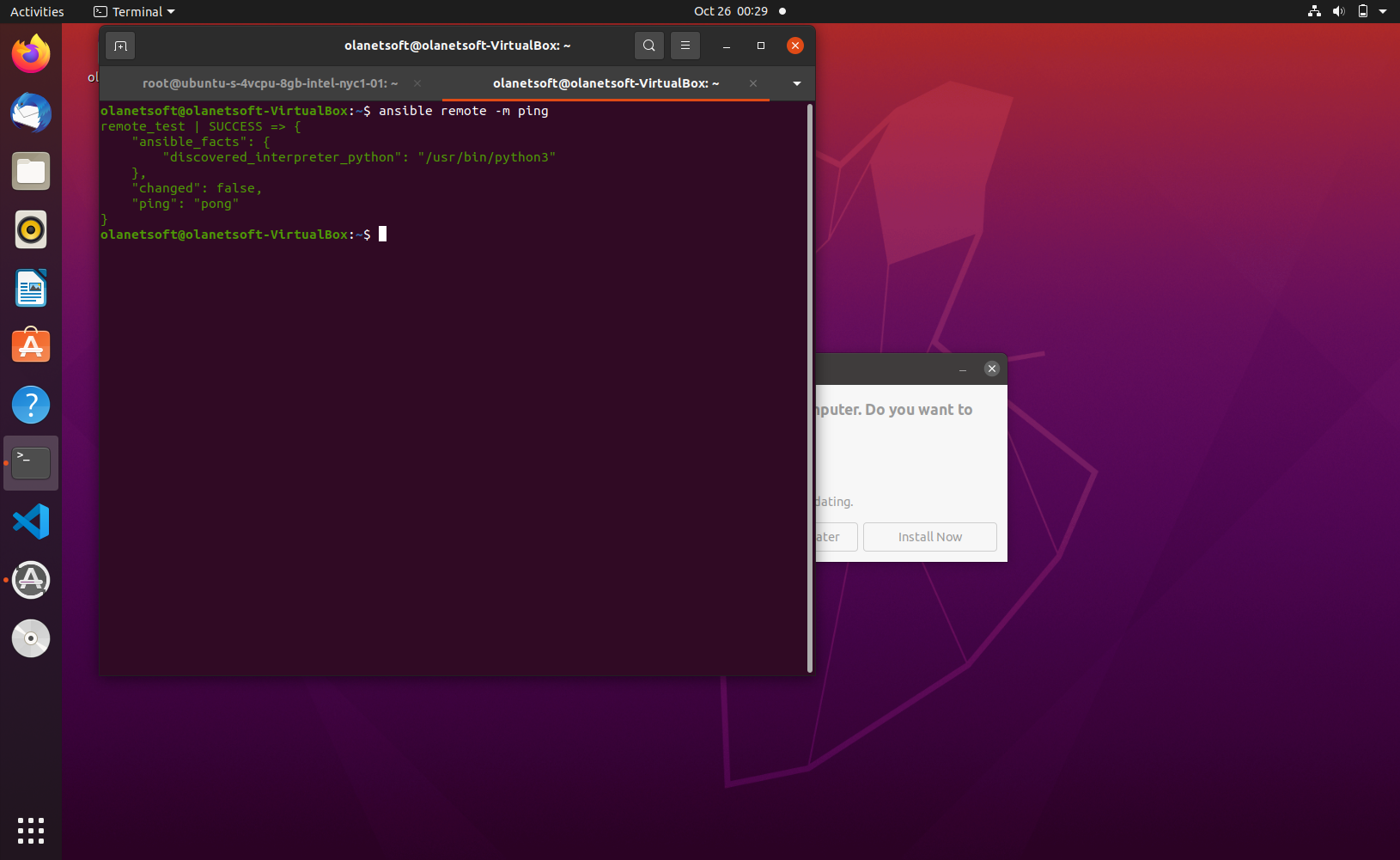 We'll make an Ansible playbook using the command below, which is the typical way of telling Ansible which commands to run on the remote server and in what order. The playbook is written in .yml and follows a strict format.

In the official Ansible documentation, you can learn more about playbooks.

Add the following code, which tells Ansible to install Docker in several steps:

We can now execute it with the command below:

After that, we'll see some magic happen (it might take a while), and somewhere in the last debug message in our terminal, we should see "Hello from Docker!"

In this article, we had a detailed look into Ansible, its benefits, how it works and what it can do, its architecture, plugins, playbook, inventory, and how to configure and deploy Docker with Ansible on a remote server.

I'd love to connect with you on Twitter | LinkedIn | GitHub

I am a Software Engineer, Technical Writer, Content Creator and a Conference Speaker.