I’ve been dreaming for years about starting to create YouTube videos and it finally happened! 😍

Last week I had the courage to create my first YouTube video - and it was an amazing experience!

In this article I’m going to tell you all the ins and outs of my first week as a YouTuber (as I guess I am one now, right? 😆)

I love creating things. I’ve created hundreds of small to medium sized projects/apps over the years (you can find a lot of them on CodePen). I even created the #100Days100Projects challenge because of my passion for building things. I wanted to push myself to the limit.

So there you have me: creating, teaching via articles... so the next logical step would be: me teaching/showing via video, right? 😄

It was hard to take the first step as I’ve been struggling to fight my “perfectionism syndrome” (if that’s a thing) because of my fear of being judged.

“You are the worst!”... and stuff like that (which was probably just in my mind anyways).

So… the first video doesn’t have to be perfect (and it probably won’t ever be perfect), buuut… who cares? It’s not about perfection. It’s about progress.

Be better today than you were yesterday. As simple as that!

This idea wasn’t just doable for me, but it also removed all the anxiety I had and it gave me the required push to start. 💪

I watched a billion videos but I never thought: “Hmm… I wonder how they made this video 🤔”... So I had to learn what it takes to create a video from 0 to hero.

One good thing about all of this was the fact that I’ve been doing some Live Streaming over on Twitch so I had a tiny bit of experience with recording my screen and my voice (although it was faaaar from being even decent 😆).

So I basically just had to record myself while I was coding and explain what I was doing in the process. Simple, right?

Apparently it’s much harder to code and talk at the same time while you’re thinking about the fact that this video will go up on the internet and everyone will be able to see what you’re doing wrong. Not only once, but over and over again. 😅

Long story short… I spent the ENTIRE DAY recording and I ended up with a 4 minute long video 😂.

There were a TON of: ummms, uuupsies, typing errors, hard breathing, forgetting my thoughts and all the things that you don’t usually see in a YouTube video - so I had to crop those things out!

And here comes another skill which I had to learn: Video editing 🎥.

I spent a good amount of time asking around other YouTubers what they’re using to edit their videos and I ended up downloading DaVinci Resolve. Why? Well, it was free (1) and I found a nice introductory video about it (2). But mostly because (1). 😂

Oh yeah… and there is also the audio…

I don’t have a “fancy” microphone yet so I had to use my iPhone headphones, which obviously don’t sound very good. But… I found this interesting article and I made it sound much better. It’ll work until I get one of those “fancy” microphones (should arrive in 1-2 weeks 👍).

So after my first video was recorded, edited and uploaded to YouTube I went ahead and posted it on Social Media.

For the record... I started my day tweeting that I was going to make my first YouTube video that day, so I gave myself no chance of giving up. I had to do it and apparently this was a good idea as I ended up making the video after all.

I kept tweeting along the way (“I recorded it”... “I’m editing it”... etc) and in the end when I actually tweeted the link to the video I was AMAZED by the huge support I got from my twitter followers! (I love you guys so much! 💜)

And there were also the comments… so supportive! 💜

We have a wonderful, supportive community of developers across the entire world!

There are things I want to improve on my future videos, but for now I'm focusing on:

But I believe that the most important thing is: quality content. So that's my main focus.

If there is something I want you all to learn from this blog post it would be:

If you are planning to do something for a long time… just START doing it!

Don’t plan too much. Don’t stress too much about it. Just DO IT!

It won’t be perfect, but you’ll learn a lot in the process and at the end of the day that's important. Be a better version of yourself, little by little.

I wish you all the best on your journey (whichever that is)! 😃 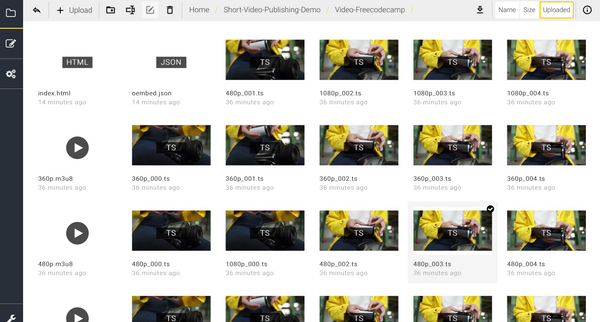