Asynchronous here refers to all those functions in JavaScript that are processed in the background without blocking any other request.

In this article, you will learn and understand how NodeJS works and handles all functions or requests sent to a server either synchronously or asynchronously.

What is an Event Loop?

You might have guessed it right – Node handles requests using an Event loop inside the NodeJS environment. But first, let's understand some basic terms which will help us understand the whole mechanism.

An event loop is an event-listener which functions inside the NodeJS environment and is always ready to listen, process, and output for an event.

An event can be anything from a mouse click to a keypress or a timeout.

What are Synchronous and Asynchronous programming?

Synchronous programming means that the code runs in the sequence it is defined. In a synchronous program, when a function is called and has returned some value, only then will the next line be executed.

Let's understand with this an example:

So you can say that the function was executed in the sequence it was defined.

Asynchronous programming, on the other hand, refers code that doesn't execute in sequence. These functions are performed not according to the sequence they are defined inside a program but only when certain conditions are met.

For example, setTimeOut() performs a task after a delay of a certain predefined number of miliseconds.

These functions do not run line by line but only when they are required to run, irrespective of the function's declaration. In this case, the function runs automatically after 3 seconds when all synchronous functions have been executed.

If you want to learn more about NodeJS and asynchronous programming, you can refer to this article

How Does an Event Loop Work?

As we go through this section you'll start to understand what you are seeing here: 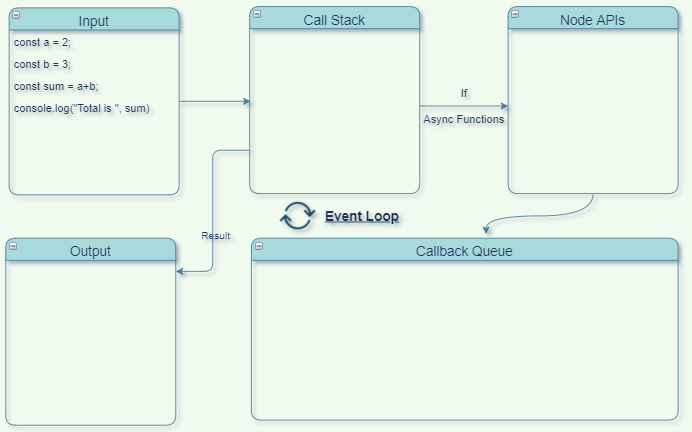 In the top-left corner, you have a Node file that is going to get executed. At the bottom left, you have an output terminal for the program. Then you have Call stack, Node APIs and Callback queue. All these together constitute the NodeJS environment.

For synchronous programming, you only need to focus on the call stack. This is the only part of the NodeJS environment that will be working in this case.

A callback stack is a data structure that you use to keep track of the execution of all functions that will run inside the program. This data structure has only one open end to add or remove top items.

When the program starts executing, it first gets wrapped inside an anonymous main() function. This is automatically defined by NodeJS. So main() gets pushed first to the callback stack. 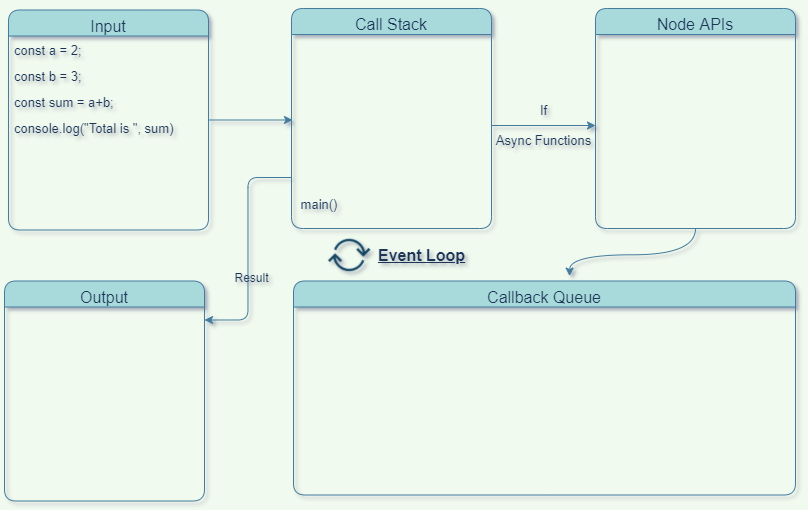 Next, the variables a and b are created and their sum is stored in a variable sum. All these values are stored in memory.

Now, the console.log() is a function that is called and pushed inside the callback stack. It gets executed and you can see the output on the terminal screen. 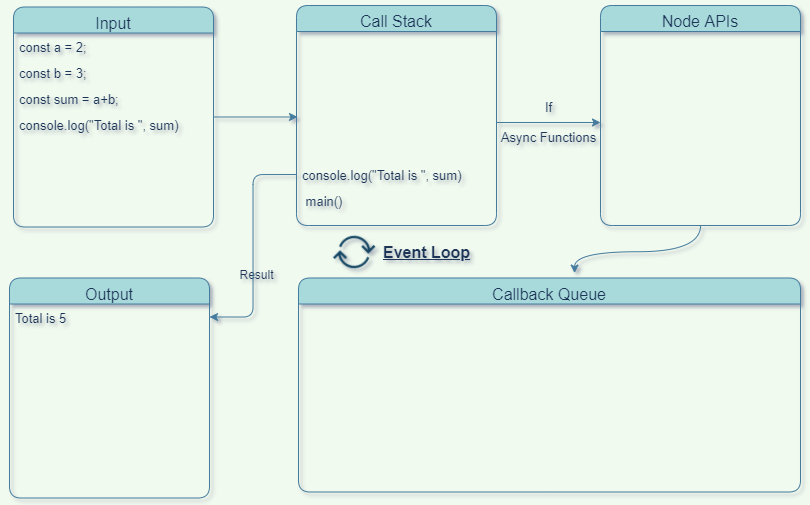 After this function gets executed, it is removed from the callback stack. Then the main() is also removed as nothing is left to be called from the program. This is how a synchronous program gets executed. 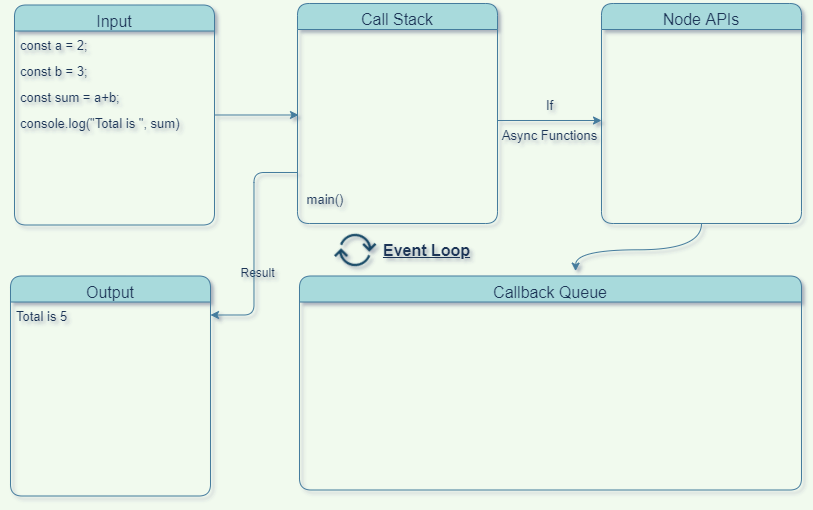 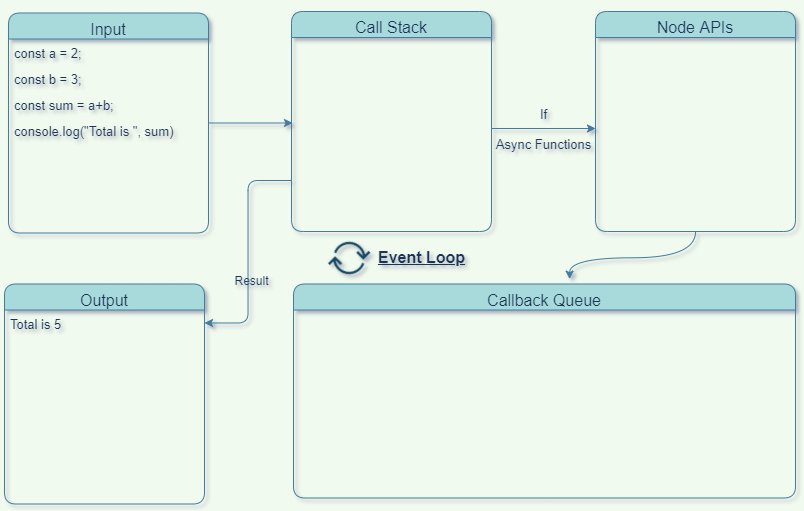 Let's start by looking at this example: 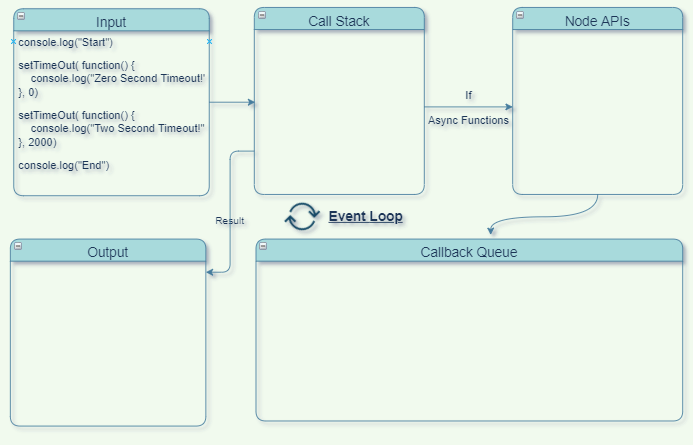 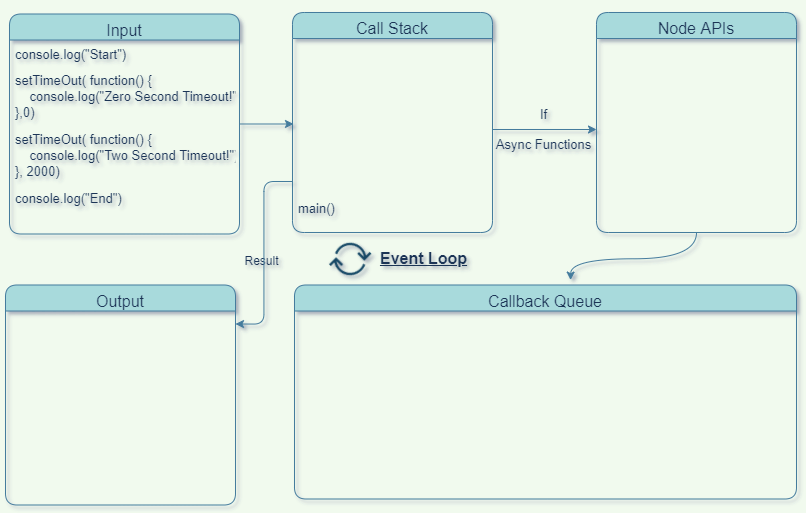 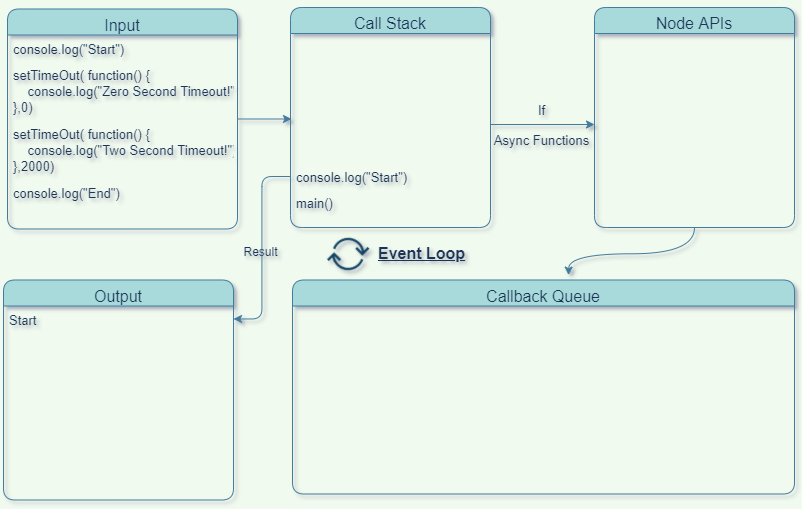 Now the next is the setTimeOut(...Zero...) function which gets added to the callback stack. 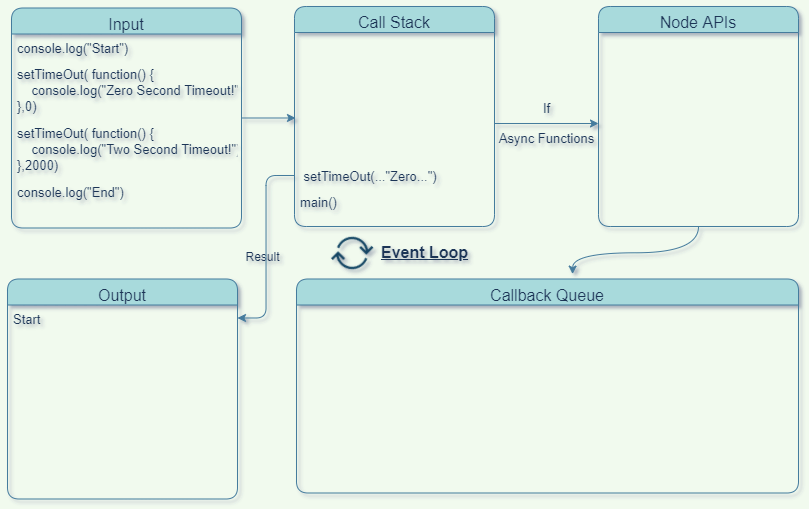 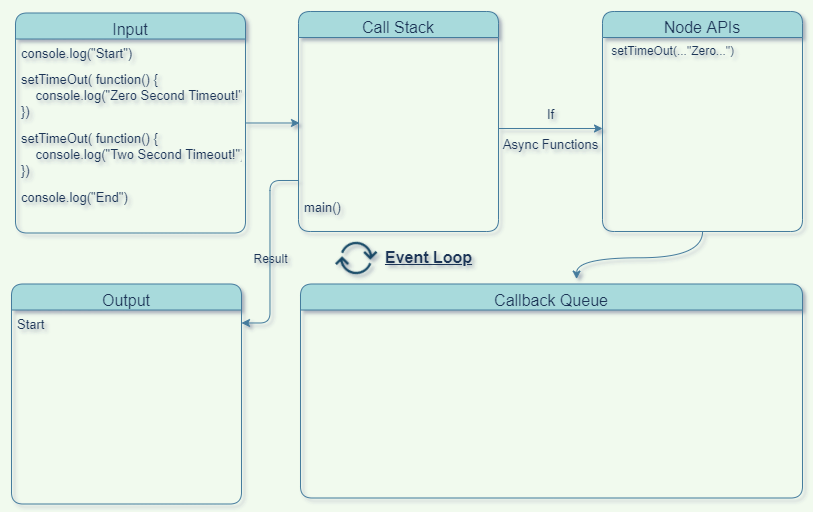 Next is the setTimeOut(...Two..) which also gets added to the Node API from the callback stack as it is an asynchronous function. Then another callback function gets set to be processed after a 2 second timeout in the background. Up until this point other functions can be performed. 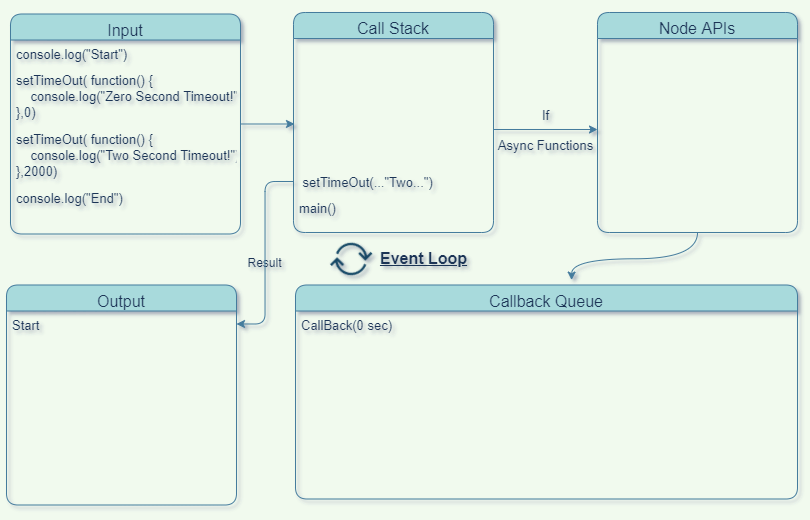 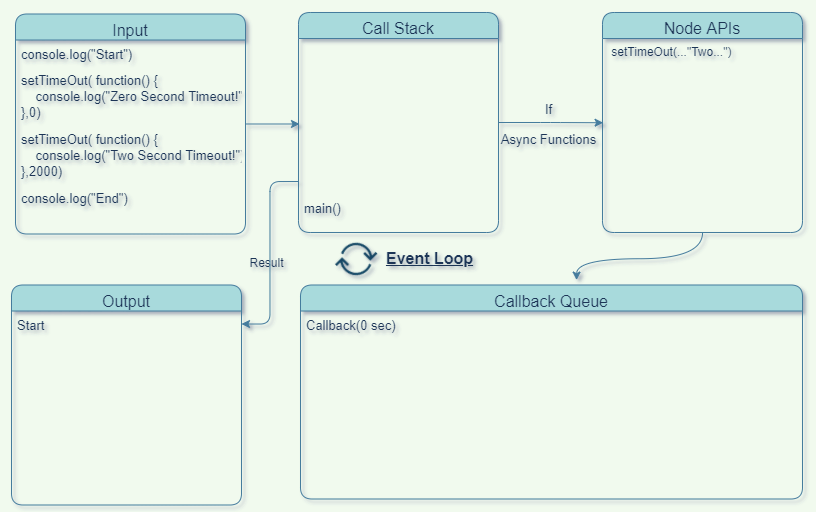 Next, the console.log("End") function is called at last in the callback stack and gets processed here. You can see the output on the terminal. Now, all the synchronous functions are processed, and main() is removed from the callback stack.

In the background, all the asynchronous functions get processed and their callbacks are stored in the callback queue. The one which is processed first will be added first in the queue for execution in the callback stack. 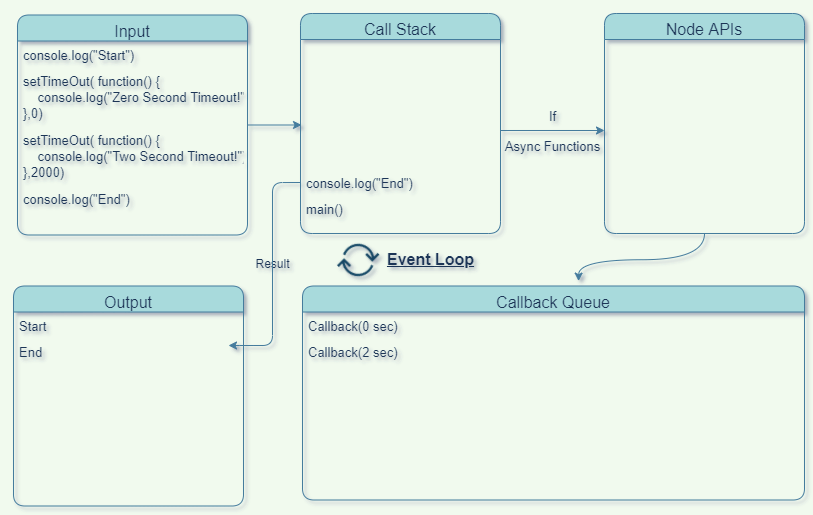 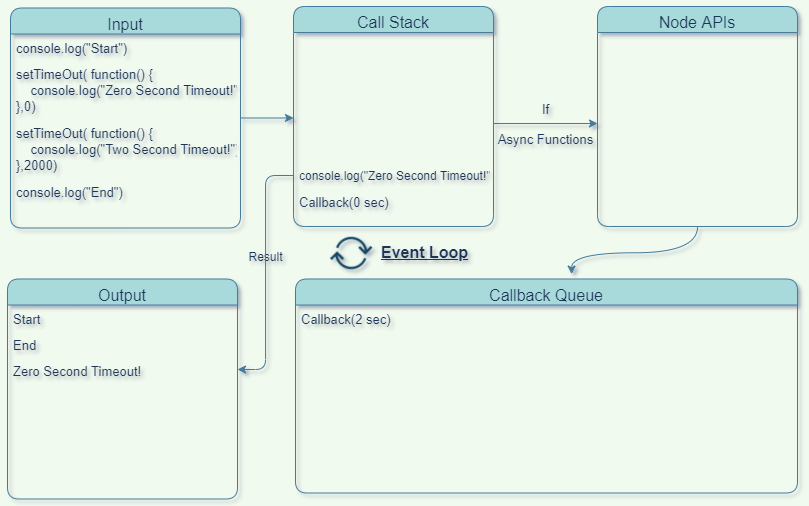 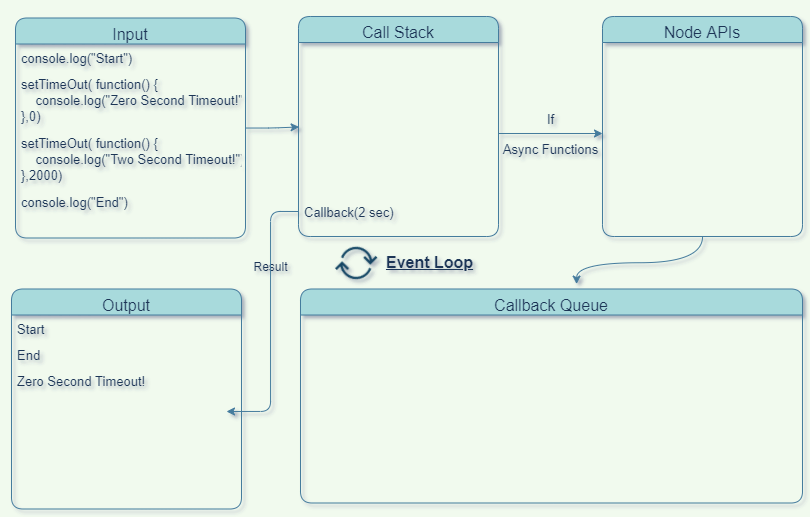 Now, one by one they are pushed to the callback stack using the event loop and finally get executed. Each of the callback functions will print the value with the console.log() function getting called each time. 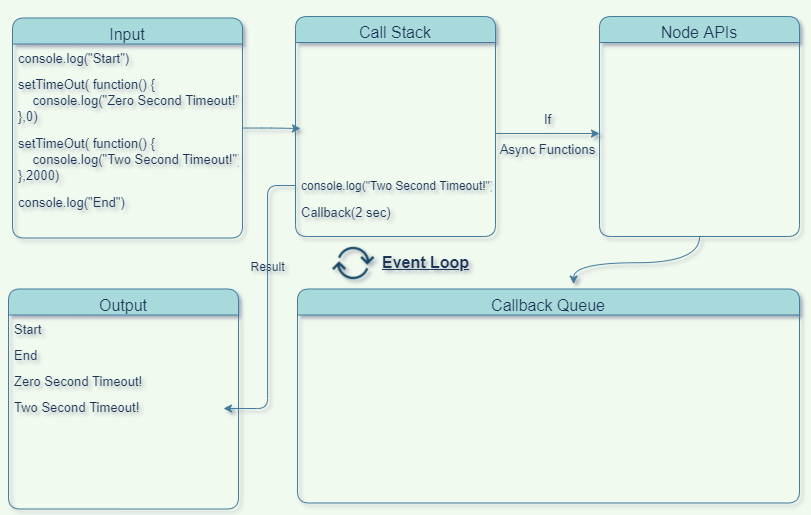 At last, these are also removed after being executed and now the callback stack is empty. 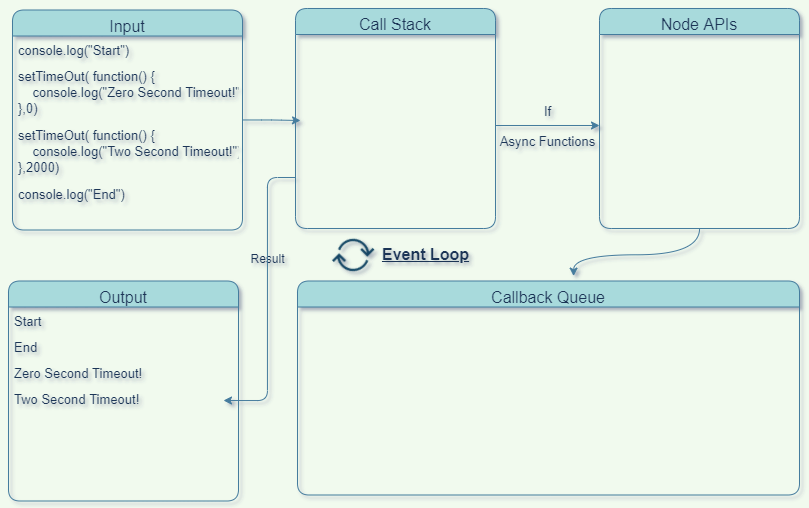 In this article, you learned the internal working of NodeJS and saw how asynchronous programs get executed.

Now you should understand why the two second time delay function does not block the rest of the program from executing. You also know why the zero second delay function prints the value at last after "End" prints.

That’s all! I hope you enjoyed reading this article and learned something new. Do share this article if you find it useful.